Verde Valley AZ (February 25, 2012) – While you are lying in your bed at night, dedicated teams of biologists are sleeping in tents so they can wake up at the crack of dawn to help protect our state’s bald eagles.

“For more than 30 years, the state’s unique nestwatch program has been an integral component of Arizona bald eagle management,” says Kenneth Jacobson, head of the Arizona Game and Fish Department Bald Eagle Management Program. “Nestwatchers have helped save the lives of over 60 eagle nestlings since the program began in 1978. Their contributions certainly have helped Arizona’s bald eagle population grow.” 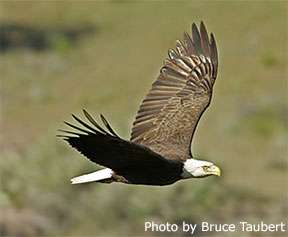 This year’s nestwatchers began their four-month tour of duty in early February. They will watch 13 breeding areas, most along the Salt and Verde rivers in national forests, on Native American lands, and in Maricopa County parks. The contractors will observe from dawn to dusk, collecting data about the eagles’ behavior, educating the public, and notifying rescuers of any life-threatening situations for the birds.

The nationally-recognized nestwatch program began as a weekend volunteer effort by the U.S. Forest Service and Maricopa Audubon to help ensure the continued success of bald eagle breeding. Now, 26 government and private agencies and tribes are involved with the program to monitor bald eagle breeding areas that are under heavy pressure from human recreational activities.

The department’s bald eagle conservation program is supported by the Heritage Fund, a 20-year-old voter initiative that provides funding for wildlife conservation and education from Arizona lottery dollars.