Sedona AZ (March 15, 2017) – The National Theatre of London continues its season with its acclaimed production of “Saint Joan” showing in Sedona on Sunday, March 26 at 3 p.m. The Sedona International Film Festival hosts the big screen premiere at its Mary D. Fisher Theatre.

From the torment of the Hundred Years’ War, the charismatic Joan of Arc carved a victory that defined France.

Bernard Shaw’s classic play depicts a woman with all the instinct, zeal and transforming power of a revolutionary. 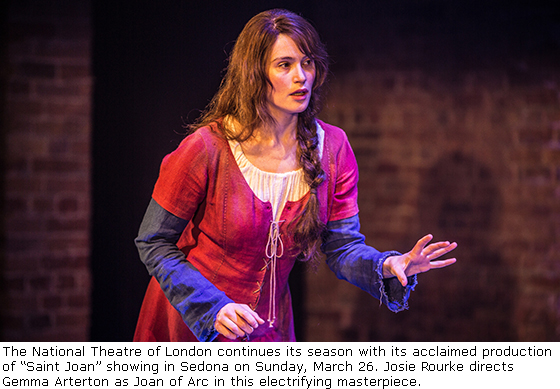 Josie Rourke directs Gemma Arterton (Gemma Bovery, Nell Gwynn, Made in Dagenham) as Joan of Arc in this electrifying masterpiece.

“Arterton is luminescent as Joan.” — The Times

“Gemma Arterton turns in the best stage performance I’ve seen her give. She’s electrifying every moment she’s on stage.” — Time Out

“Saint Joan” will be shown at the Mary D. Fisher Theatre on Sunday, March 26 at 3:00 p.m. Tickets are $15, or $12.50 for Film Festival members. Tickets are available in advance at the Sedona International Film Festival office or by calling 928-282-1177 or online at www.SedonaFilmFestival.org. Both the theatre and film festival office are located at 2030 W. Hwy. 89A, in West Sedona.