National Theatre of London’s
‘Rosencrantz & Guildenstern Are Dead’ May 7

Sedona AZ (April 26, 2017) – The National Theatre of London continues its season with its acclaimed production of “Rosencrantz & Guildenstern Are Dead” showing in Sedona on Sunday, May 7 at 3 p.m. The Sedona International Film Festival hosts the big screen premiere at its Mary D. Fisher Theatre.

David Leveaux’s new production marks the 50th anniversary of the play that made a young Tom Stoppard’s name overnight.

Against the backdrop of Hamlet, two hapless minor characters, Rosencrantz and Guildenstern, take center stage.  As the young double act stumble their way in and out of the action of Shakespeare’s iconic drama, they become increasingly out of their depth as their version of the story unfolds. 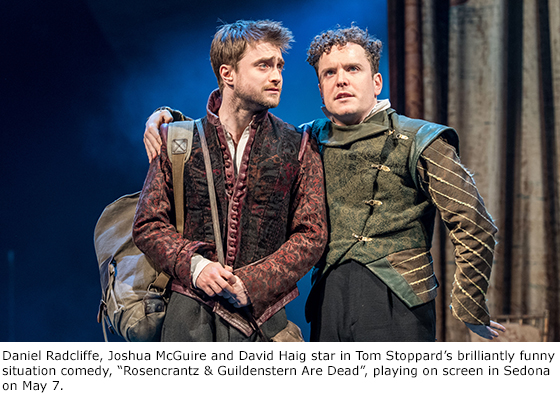 “Rosencrantz & Guildenstern Are Dead” is a lively comedy with plenty of comic wordplay and witty one-liners. Critics and audiences are raving about the production.

“Fantastically light on its feet.” — Independent

“Rosencrantz & Guildenstern Are Dead” will be shown at the Mary D. Fisher Theatre on Sunday, May 7 at 3:00 p.m. Tickets are $15, or $12.50 for Film Festival members. Tickets are available in advance at the Sedona International Film Festival office or by calling 928-282-1177 or online at www.SedonaFilmFestival.org. Both the theatre and film festival office are located at 2030 W. Hwy. 89A, in West Sedona.