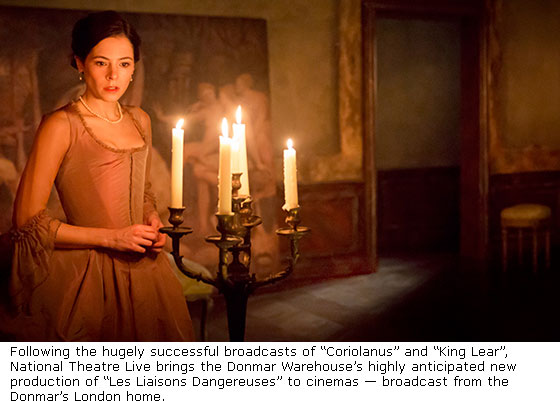 Former lovers, the Marquise de Merteuil and Vicomte de Valmont now compete in games of seduction and revenge. Merteuil incites Valmont to corrupt the innocent Cecile de Volanges before her wedding night but Valmont has targeted the peerlessly virtuous and beautiful Madame de Tourvel. While these merciless aristocrats toy with others’ hearts and reputations, their own may prove more fragile than they supposed.

Critics are raving about “Les Liaisons Dangereuses”, and it has garnered 4- and 5-star reviews from every major publication in London:

“An evening to richly savour.” — Guardian

“Director Josie Rourke has given us a Les Liaisons Dangereuses to relish.” — Sunday Times

“One of the best stage adaptations ever written.” — Observer

“Les Liaisons Dangereuses” will be shown at the Mary D. Fisher Theatre on Sunday, March 6 at 3:00 p.m. Tickets are $15, or $12.50 for Film Festival members. Tickets are available in advance at the Sedona International Film Festival office or by calling 928-282-1177 or online at www.SedonaFilmFestival.org. Both the theatre and film festival office are located at 2030 W. Hwy. 89A, in West Sedona.