Sedona AZ (November 9, 2017) – The Sedona International Film Festival is proud to present the next Met Live Opera presentation of Thomas Adès’ “The Exterminating Angel” on Saturday, Nov. 18. There will be two shows that day at the Mary D. Fisher Theatre: 11 a.m. (live simulcast) and 4 p.m. (encore).

Plan to come early as John Steinbrunner will lead a pre-opera talk one hour before each production (10 a.m. for the morning show and 3 p.m. for the encore).

Following the rapturous response to his last opera, “The Tempest”, the Met presents the American premiere of Thomas Adès’s “The Exterminating Angel”, inspired by the classic Luis Buñuel film of the same name. Hailed by the New York Times at its 2016 Salzburg Festival premiere as “inventive and audacious … a major event,” “The Exterminating Angel” is a surreal fantasy about a dinner party from which the guests can’t escape. Tom Cairns, who wrote the libretto, directs the new production, and Adès conducts his own adventurous new opera. 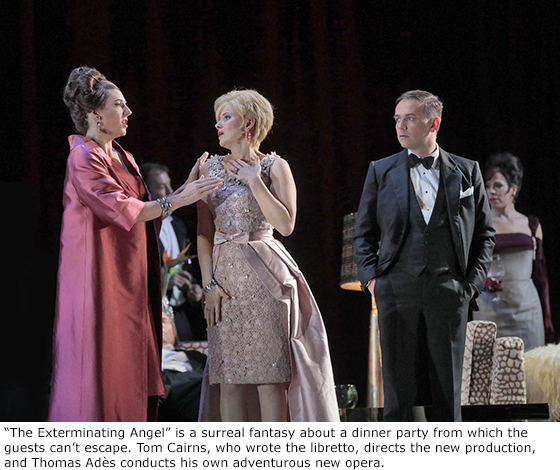 At the mansion of Edmundo and Lucia de Nobile, guests are expected for dinner, but strange things are happening. The butler, Julio, fails to stop Lucas, the footman, from running away, and the maids Meni and Camilla also attempt to leave. The Nobiles arrive after attending a performance at the opera. When the guests go into the dining room, Meni and Camila finally escape along with some other servants.

At dinner, Nobile toasts Leticia. As Lucia announces the first course, the waiter spills it spectacularly on the floor, but not everyone is amused. Lucia decides to postpone her other “entertainments,” and a performing bear and a number of lambs are removed to the garden. The rest of the servants flee the house despite Lucia’s protestations. Only Julio remains behind.

In the drawing room, Blanca performs at the piano. The engaged couple Eduardo and Beatriz dance, and Leonora flirts with Dr. Conde. When he declines to dance, she kisses him instead. Conde confides in Raúl Yebenes that Leonora is gravely ill and does not have long to live. Blanca’s performance ends to general acclaim. The guests encourage Leticia to sing, but Señor Russell protests that she has performed enough for the evening.

A number of guests prepare to depart, while Roc falls asleep. In the cloakroom, Lucia gives her secret lover, Colonel Álvaro Gómez, a fleeting kiss. The guests become lethargic and distracted—although it is now very late, none of them attempts to leave. Though confused, Edmundo graciously offers beds to anyone who wishes to stay. Russell and the Colonel are horrified as some guests remove their tailcoats, but eventually they too lie down to sleep. Eduardo and Beatriz retreat to a private corner to spend their first night together.

The guests wake the following morning. Silvia announces that she slept very badly. Conde examines Russell: The old man is dying. Julio is supposed to prepare breakfast but reports that no supplies have arrived at the house. When Lucia tries to take some of the ladies to her bedroom to freshen up, they do not make it past the threshold of the dining room. Blanca is worried about her children, but even she and her husband are unable to leave. Silvia finds the unusual situation humorous, particularly as she knows her son is in good hands with his private tutor, Padre Sansón. A further attempt by the guests to leave fails when Julio approaches with coffee and the leftovers from the previous evening’s dinner. Leticia entreats the butler not to enter the drawing room, but her warnings are in vain. Blanca is desperate, while Raúl sees no reason to get overly excited. Francisco complains he cannot possibly stir his coffee with a teaspoon. When sent to procure coffee spoons, Julio also seems to have become a prisoner in the drawing room.

Evening approaches. Russell’s condition has worsened: He has fallen into a coma and needs urgent medical attention. When they have nothing left to drink, the guests begin to panic. Conde pleads for calm, although even he seems to be losing his composure. Raúl becomes aggressive and holds Edmundo responsible for the situation. Francisco is frantic and resists all attempts at pacification. Russell suddenly and unexpectedly regains consciousness, expressing his relief that he will not live to experience the “extermination.” Beatriz is troubled by the thought of dying amidst all these people, rather than alone with Eduardo.

During the night, Russell dies. Conde and the Colonel haul his corpse into the closet, witnessed by Eduardo and Beatriz.

Police guarding the mansion drive back a crowd of people gathered outside. Although some people break through the police ranks, nobody is able to enter the house.

In the drawing room, Julio and Raúl burst a water pipe, and the guests rush desperately to quench their thirst. Tormented with hunger, everyone’s behavior becomes increasingly irrational. Blanca combs only one side of her hair, driving Francisco to hysterical desperation. When he is unable to find the pills for his stomach ulcer, Francisco immediately presumes that someone has hidden them. Raúl goads Francisco about his relationship with his sister and triggers a volley of insults between the two men. Edmundo tries to keep the peace, but this merely earns him recriminations. Leonora, who is in great pain, expresses her longing for the assistance of Conde and the Virgin Mary. Francisco is nauseated by Blanca’s smell and once again loses his nerves.

In her delirium, Leonora sees a disembodied hand wandering around the drawing room. Trying to stop it, she stabs Blanca’s hand with a dagger. In the closet, Eduardo and Beatriz decide to take their own lives. Roc appears to molest Leticia, but Raúl accuses the Colonel instead. Edmundo is injured during the ensuing scuffle. The lambs from the garden wander into the drawing room.

The army has quarantined the mansion. Padre Sansón appears with Silvia’s son, Yoli, and the people demand that the boy be sent inside. Despite encouragement from the crowd, Yoli is unable to get into the house.

The guests have slaughtered the lambs and cook them on a makeshift fire. Leonora recalls a premonition she had on the evening of the opera performance and attempts a magic ritual with Blanca and Leticia. It fails, and she declares that innocent blood is needed. Francisco discovers Eduardo and Beatriz’s bodies in the closet. During the course of yet another quarrel, Raúl hurls Francisco’s box of pills out of the drawing room. Silvia no longer takes any interest; cradling the corpse of one of the lambs in her arms, she thinks she is rocking Yoli to sleep.

The bear appears across the threshold. Gradually the idea takes hold among the guests that a sacrifice is needed to secure their liberation: Edmundo must be killed. Conde and the Colonel try to make the others reconsider but to no avail. Edmundo declares that he will sacrifice himself, but Leticia interrupts him. She realizes that, at this moment, each of them is in exactly the same place as when their strange captivity began. With her encouragement, the others hesitantly repeat their actions from that first night. Together they approach the threshold and are finally able to cross it. The guests and the crowd outside the mansion encounter one another. Their freedom will not last long.

The Met Live Opera’s “The Exterminating Angel” will be shown at the Mary D. Fisher Theatre on Saturday, Nov. 18 at 11 a.m. (live simulcast) and 4 p.m. (encore). The pre-opera talks will take place one hour before each show. Tickets are $25 general admission, $22 for Film Festival members, and $15 for students. Tickets are available in advance at the Sedona International Film Festival office or by calling 928-282-1177. Both the theatre and film festival office are located at 2030 W. Hwy. 89A, in West Sedona. For more information, visit:www.SedonaFilmFestival.org.