Sedona AZ (April 4, 2018) – The Sedona International Film Festival is proud to present the next Met Live Opera presentation of Giuseppe Verdi’s “Luisa Miller” on Saturday, April 14. There will be two shows that day at the Mary D. Fisher Theatre: 9:30 a.m. (live simulcast) and 4 p.m. (encore).

Plan to come early as John Steinbrunner will lead a pre-opera talk one hour before each production (8:30 a.m. for the morning show and 3 p.m.for the encore). 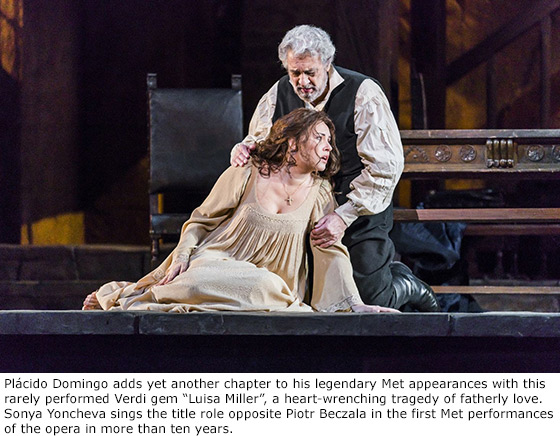 Plácido Domingo adds yet another chapter to his legendary Met appearances with this rarely performed Verdi gem, a heart-wrenching tragedy of fatherly love. Sonya Yoncheva sings the title role opposite Piotr Beczala in the first Met performances of the opera in more than ten years. The cast also features Plácido Domingo as Luisa’s father Miller, with Olesya Petrova as Federica, and Alexander Vinogradov in his Met debut and Dmitry Belosselskiy as Walter and Wurm respectively, the ruthless men determined to tear Luisa and Rodolfo apart.

The Met Live Opera’s “Luisa Miller” will be shown at the Mary D. Fisher Theatre on Saturday, April 14 at 9:30 a.m. (live simulcast) and 4 p.m.(encore). The pre-opera talks will take place one hour before each show. Tickets are $25 general admission, $22 for Film Festival members, and $15 for students. Tickets are available in advance at the Sedona International Film Festival office or by calling 928-282-1177. Both the theatre and film festival office are located at 2030 W. Hwy. 89A, in West Sedona. For more information, visit: www.SedonaFilmFestival.org.