Man who Threatens Deputies with Knife is Subdued

Rimrock AZ (June 8, 2016) – On June 3, 2016, at approximately 2:45 AM, 21-year-old Devon Shepard from Rimrock was arrested for Aggravated Assault on Law Enforcement Officers and booked at the Camp Verde Detention Center. He remains in-custody on a $5000 bond.

Following a domestic violence incident in the Rimrock area, deputies were directed to search for a male suspect who had walked away from the scene. During a check of the area, a deputy found a man, later identified as Shepard, walking along Beaver Creek Road near Top O’ the Morning in Rimrock. The deputy contacted Shepard to determine if he was involved in the domestic violence situation. When the deputy approached, he noticed a knife handle protruding out of Shepard’s front pant pocket. Shepard told the deputy to back off and stay away as he reached for the knife. The deputy held Shepard at gunpoint as a second deputy arrived to assist. 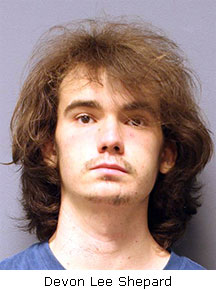 Shepard remained uncooperative while in the process of removing the knife from his pocket. When the secondary deputy deployed his stun gun, the probes failed to make contact. The primary deputy then took the opportunity to deploy his stun gun. In this instance, contact with Shepard’s body was successful and caused him to collapse on the ground. Although he remained non-complaint, deputies were eventually able to handcuff him without further injury.

Deputies disarmed Shepard by recovering 2 large fixed bladed kitchen knives in his possession. Shepard claimed he was being harassed by unknown persons but could not provide details. He also admitted feeling hopeless and confronting deputies intending a suicide-by-cop result. Deputies noted the strong odor of alcohol on Shepard’s breath and he admitted to recent narcotic use. Shepard was cleared for booking by medical staff. Deputies determined Shepard was not involved in the original domestic violence report.

Sheriff Mascher appreciates the commendable restraint and tactics utilized by these deputies to bring the suspect into custody.