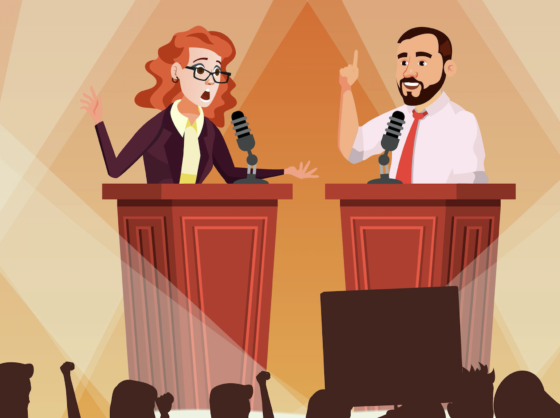 Candidates expressed their differing opinions to questions posed by

Jablow pretty much touted his experience and the work he’s done through his eight years on the council to benefit Sedona, criticising Armstrong for her lack of political experience.

Armstrong said experience matters little, when you get zero results.

A number of boilerplate questions were asked of the candidates ranging from their positions on workforce housing, consent agendas, traffic, the city budget, trimming city staff — to short-term rentals.

Armstrong accused Jablow of lack of vision and ineffectiveness during his time on the council.

Jablow defended himself and his record, citing the many accomplishments he said benefited the city.

Armstrong said Jablow’s main function on the council was to be a “rubber stamp” for the Sedona Mayor Sandy Moriarty, an accusation Jablow strongly denied.

It was in the closing of the second half of the debate that the moderators unleashed their toughest questions.

They wanted to know the candidates’ level of support or lack of support for the Sedona Chamber of Commerce, understanding that the actions of the council, in eliminating destination marketing, hurt  businesses that depend on tourism. Many believe it’s because the council derailed destination marketing that many Sedona business owners are now struggling to stay afloat.

He said he had knocked on hundreds of doors and he was asked by most of those who opened them to stop  tourism.

He recognized that Sedona restaurants are doing poorly this season. He said the council would be revisiting the issue.

Armstrong responded by questioning Jablow’s leadership abilities, asking if he was “a leader or follower,” stating that the city had cut off the chamber’s ability to market Sedona without any consideration for the businesses.

She said money allocated for the chamber to manage tourism, should be spent for promotion.

A question from the moderators no one expected, asked what they would do as mayor if another pandemic were to hit, considering the city was shut down and forced to wear masks during the pandemic by the city’s mayor.

Armstrong said she would never have the audacity to tell someone else what to do with their lives, based on “the whim” of a flawed national agenda.

She said it’s up to every individual to make the choice and that she is very strongly opposed to any person presuming they have dictatorial power over a city.

“I think it’s appalling that one individual would require something that is not scientifically proven,” she said, referring to the mask mandate.

Jablow asserted he did not support closing down the city or the mask mandate, stating that was the mayor’s choice, not his.

“I talked to many business owners who wanted to be able to post signs that required masks to enter,” he said.  He said it’s right to have a choice.

He said he did not want to second guess the mayor.

“The mayor did it on her own,” he said. “I would not have made the same choice.”

The video of the complete debate can be viewed HERE .

The video was created, sponsored and published by The Red Rock News.

The next mayoral candidate forum will be held Wednesday, October 12, 6 to 8 p.m. at the Sedona Performing Arts Center. The forum will be sponsored by the Northern Arizona League of Women Voters.