McGuireville AZ (January 10, 2021) – The Yavapai County Medical Examiner has confirmed the remains found on January 1, 2021, near McGuireville are that of 31-year-old Shane Rollman. Shane was reported missing to the West Covina Police Department in California, last seen September 12, 2020. Shane’s abandoned vehicle was found by DPS Troopers on September 23, 2020, at the McGuireville rest stop off I 17. Shane could not be located following a search by Troopers and subsequent extensive search effort by YCSO Forest Patrol Deputies and search volunteers.

The cause and manner of death is still pending, in part due to toxicology test results which are underway. 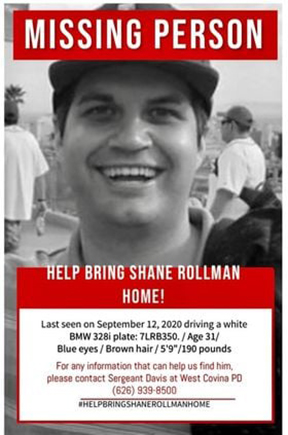 Our condolences to Shane’s family on his passing.

McGuireville AZ (January 6, 2021) – On January 1, 2021, around 1:30 PM, YCSO deputies were dispatched to a report of human remains discovered by a hiker in the McGuireville area, north of Rimrock, Arizona. The GPS coordinates provided placed the hiker near Dry Beaver Creek in a small wash about 2 miles northwest of the McGuireville rest area. Deputies hiked into the target location and confirmed human remains in an advanced state of decay at the bottom of a sandy wash in thick brush.

The Yavapai County Medical Examiner’s Office was contacted and based on the logistics of removing the remains and pending sunset, it was determined the recovery would occur the following morning. The next day, under the direction of YCSO Forest Patrol Deputies, members of the Yavapai County Search and Rescue Team’s (YCSRT) Back Country and Quad unit assisted with the recovery using all terrain vehicles to access the site. The remains were turned over the to custody of the Yavapai County Medical Examiner. YCSO evidence technicians were also on scene to collect clothing and any potential evidence likely associated with the body following a line search of the grounds.

A YCSO detective is currently assigned to the case and awaiting a disposition from the Medical Examiner as to identification of the body along with cause and manner of death if determined. Medical Examiner investigators have indicated that a dental records check will be necessary to confirm identification which could take several days.