Sedona AZ (January 13, 2012) – Three Sedona area officials are readying their taste buds for a return engagement as Judges for The Rotary Club of Sedona’s Great Sedona Chili Cook-Off. Sedona Mayor Rob Adams, Sedona Police Chief Ray Cota and Verde Valley Fire Chief Nizih Hazime will judge chili prepared by top chefs of the Sedona area at the annual Cook-Off to be held at Tlaquepaque on May 5, 2012.

March 1, 2012 is the deadline for Verde Valley restaurants and chefs to sign up for the Great Sedona Chili Cook-Off, a special event at Tlaquepaque’s Cinco de Mayo Fiesta.

Proceeds from the event will benefit Rotary International’s goal of eradicating polio worldwide by 2014. Polio is a disease that has become a faint memory for many in the United States. Because of Rotary International’s leadership since 1985 the incidence of polio has been slashed by 99% worldwide. But it remains a challenge in four nations: Afghanistan, Nigeria, Pakistan and India. Thanks to a $355 million challenge grant from the Bill and Melinda Gates Foundation, Rotary Clubs throughout the world are raising $200 million to totally eradicate polio. It is an attainable goal; for only 60 cents worth of oral polio vaccine a child can be protected from polio for life. 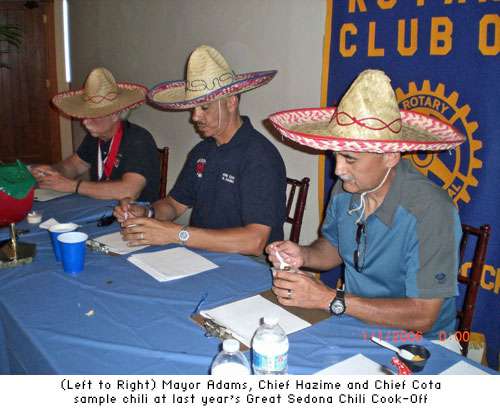