Cottonwood AZ (February 28, 2018) – Anthony Mazzella returns to Old Town Center for the Arts after well-received sold out performances.  On Saturday, March 10th 7:00 PM, Anthony is joined for one night only, by Fingerstyle Guitarist Michael Gulezian from Colorado.

Michael Gulezian is one of the most highly acclaimed solo acoustic instrumental guitarists of our time. He is a phenomenal technical guitarist with the rare ability to transcend his own virtuosity, creating music that touches and moves people at the deepest level. He’s been called the musical link between John Fahey and Michael Hedges. Artists as diverse as Michael Hedges, Willy Porter, and Henry Kaiser have claimed him as a primary musical influence; young lions such as Erik Mongrain, Andy McKee, and Trevor Gordon Hall are quick to acknowledge him as an inspiration. 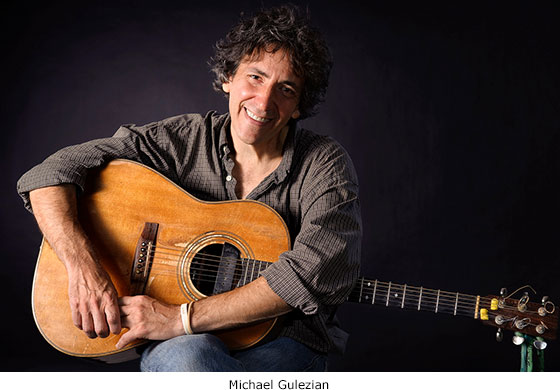 In concert, Michael is all warmth and humor … and though it’s visually breathtaking to watch him perform, a concert with Michael is more than a display of cutting-edge virtuosity – it is the passionate communion of master musician engaged with his audience in the mystery of self-revelation, creating music of atmospheric power, ecstatic joy, and haunting beauty.  If you enjoy the artistry of musicians such as Leo Kottke and Michael Hedges – guitarists who amaze us with what ten fingers and one guitar can do – then you will love Michael Gulezian.

For this special evening, Michael teams up with Anthony Mazzella.

Anthony Mazzella is one of the most virtuosic and passionate guitar players in the world today.  His performance career began in New York at Manhattan’s Café Wah, Birdland, CBGB’s and the famous Blue Note, and he has spent years touring the U.S. and world stages as a soloist and as the concert guitarist for world music master Omar Faruk Tekbilek. Anthony’s original guitar music is composed with a fusion of world influences consisting of acoustic and electric finger-style, classical, flamenco, jazz, funk, R&B, Celtic, ambient, rock, medieval & near-eastern styles. 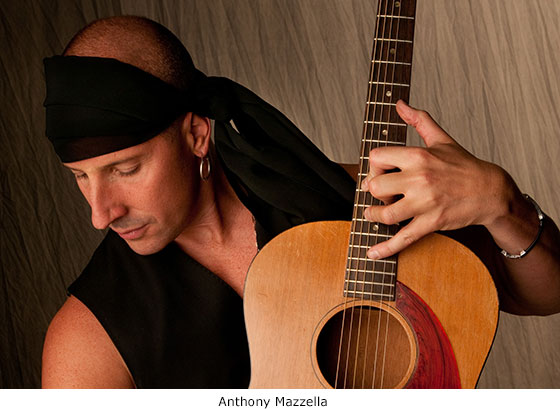 Anthony is considered to be among the top guitarists performing in the world today. His original guitar music is composed with a fusion of world influences consisting of acoustic and electric finger-style, classical, flamenco, jazz, funk, R&B, Celtic, ambient, rock, medieval & near-eastern styles. He has opened for headlining artists, James Brown, Tower of Power, The Commodores, and Spyro Gyra. He has recorded six award winning albums, including four solo efforts: Electric Fingerstyle Guitar, Unity, Heavenly Guitar and Ritual.  His collaboration with Chris Spheeris, BRIO, won “best acoustic instrumental album of 2001” by NAV, and the self titled “Electric Harp Guitar Group” CD with William Eaton and Fitzhugh Jenkins was selected as one of the top 25 albums of 2007 by Echoes syndicated radio program.

Come enjoy and evening of evocative original guitar music, from two artists who have innovated new ways to approach and play the guitar.  And there’s a rumor that Michael and Anthony will join together for a finale piece created just for this concert.

Michael Gulezian and Anthony Mazzella in concert happens Saturday, March 10th at 7:00 PM. For ticket information and to learn more about the concerts, classes at Studio B and community events at OTCA please visit www.oldtowncenter.org.  Tickets are available online at www.showtix4u.com, in Cottonwood at Desert Dancer and Mount Hope Natural Foods; and in Sedona at The Literate Lizard Bookstore.  Old Town Center for the Arts is located at 5th Street & Main in Old Town Cottonwood. For more information please visit oldtowncenter.org or call Elena Bullard at 928.634.0940.