Sam, a middle-aged Aboriginal man, works for a preacher in the outback of Australia’s Northern Territory. When Harry, a bitter war veteran, moves into a neighboring outpost, the preacher sends Sam and his family to help Harry renovate his cattle yards. But Sam’s relationship with the cruel and ill-tempered Harry quickly deteriorates, culminating in a violent shootout in which Sam kills Harry in self-defense. 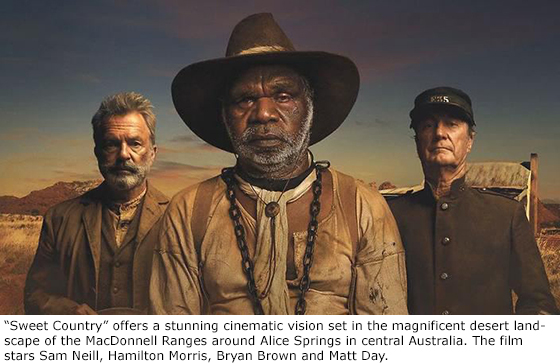 As a result, Sam becomes a wanted criminal for the murder of a white man, and is forced to flee with his wife across the deadly outback, through glorious but harsh desert country. A hunting party led by the local lawman Sergeant Fletcher is formed to track Sam down. But as the true details of the killing start to surface, the community begins to question whether justice is really being served.

“Sweet Country” offers a stunning cinematic vision set in the magnificent desert landscape of the MacDonnell Ranges around Alice Springs in central Australia. The film delivers a story of black and white frontier conflict, yet turns the central theme of justice on its head, to both surprise and ultimately move audiences.