In Rebecca Miller’s witty, modern romantic comedy “Maggie’s Plan”, Greta Gerwig portrays Maggie Hardin, a vibrant and practical thirty-something New Yorker working at the New School who — without success in finding love — decides now is the time to have a child on her own. But when she meets John Harding (Ethan Hawke), a “ficto-critical anthropologist” and struggling novelist, Maggie falls in love for the first time, and adjusts her plans for motherhood. 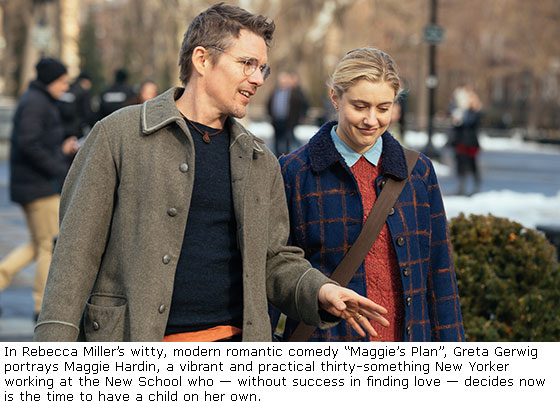 Complicating matters, John is in a strained marriage with Georgette Nørgaard (Julianne Moore), a brilliant Danish academic. With a Greek chorus of Maggie’s eccentric and hilarious best friends Tony and Felicia (played by Bill Hader and Maya Rudolph) observing wryly from the sidelines, Maggie sets into motion a new plan that catapults her into a nervy love triangle with John and Georgette; intertwining their lives and connecting them in surprising and the humorous new ways. Maggie learns that sometimes destiny should be left to its own devices.

“Maggie’s Plan” is a sweet, sophisticated and funny exploration of the unexpected complexities of modern romance, mixing heart and humor in a story of the delightful variability of relationships over the course of time.

“Amazing! Make plans to see this! Greta Gerwig is a delight!” says Stephen Whitty of the New York Daily News.

Anthony Weiner was a young congressman on the cusp of higher office when a sexting scandal forced a humiliating resignation. Just two years later, he ran for mayor of New York City, betting that his ideas would trump his indiscretions. He was wrong. 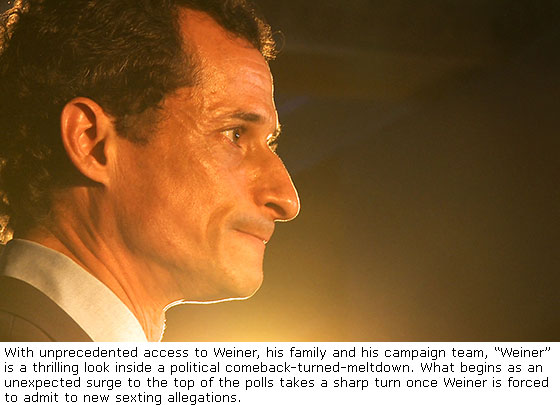 With unprecedented access to Weiner, his family and his campaign team, “Weiner” is a thrilling look inside a political comeback-turned-meltdown. What begins as an unexpected surge to the top of the polls takes a sharp turn once Weiner is forced to admit to new sexting allegations. As the media descends and dissects his every move, Weiner desperately tries to forge ahead, but the increasing pressure and crippling 24-hour news coverage halt his political aspirations.

With the city of New York as a loud and bustling backdrop, Weiner walks the line between political farce and personal tragedy as it plunges through an increasingly baffling political campaign with unflinching clarity, humor, and pathos.

“Mind-blowing … one of the best documentaries ever made about a political scandal!” raves Rolling Stone.