Sixteen years after the release of the groundbreaking film “Rivers and Tides – Andy Goldsworthy Working with Time” director Thomas Riedelsheimer has returned to work with the artist.

“Leaning into the Wind: Andy Goldsworthy” follows Andy on his exploration of the layers of his world and the impact of the years on himself and his art. As Goldsworthy introduces his own body into the work it becomes at the same time even more fragile and personal and also sterner and tougher, incorporating massive machinery and crews on his bigger projects. 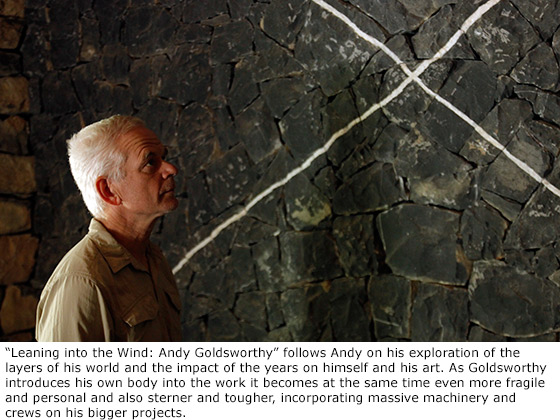 “Marvelous! A contemplative beauty. A chance to consider and be moved by a richer sort of connectedness than our lives typically allow.” — Alan Scherstuhl, The Village Voice

Artist Andy Goldsworthy lives in Scotland. He makes works of art using the materials and conditions that he encounters wherever he is. Using earth, rocks, leaves, ice, snow, rain, or sunlight, the resulting artworks exist briefly before they are altered and erased by natural processes. He also uses his own body as a medium, as with his Rain Shadows, or through actions such as spitting, throwing, climbing and walking. He has undertaken commissions in the Queensland rainforest, Australia and the New Zealand coast; in Rio de Janeiro, New York City, St Louis, Montreal and San Francisco; in the New Mexico desert, the mountains of central Spain and Haute-Provence, France, and the fells of Cumbria and Dumfriesshire.