Enjoy an evening of the classic doo-wop sound of the legendary group The Diamonds plus a holiday musical spectacular: Silver Bells and Diamonds — fun for the whole family!

The second show in the 2012-13 series will be on Monday, Dec. 10 featuring the number one doo-wop recording group of all times: The Diamonds, starring in “Silver Bells and Diamonds” — A Doo-Wop Holiday Musical Spectacular! 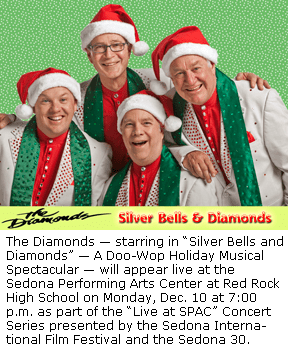 The show is appropriate for all ages and will provide classic and holiday fun for the whole family. Showtime will be 7:00 p.m. on Dec. 10 at the Sedona Performing Arts Center at Red Rock High School.

In an award-winning career that spans more than six decades, The Diamonds boast an impressive three gold records (Silhouettes, The Stroll and Little Darlin’), 33 appearances on American Bandstand, several soundtrack recordings and permanent places in the Vocal Group and Doo-Wop Halls of Fame.

In 1957, The Diamonds released an instant million-selling hit: Little Darlin’. The song continues to sell worldwide and has been dubbed “the National Anthem of Rock and Roll”. To date it has sold approximately 20 million copies. A string of hit records followed and landed them on the top of the charts of doo-wop music.

Through the years since the release of Little Darlin’, The Diamonds have learned one important lesson—the durability of this classic rock and roll music is as much about the future as it is about the past. As a result, The Diamonds continue to expand their audience to this day, performing in a variety of venues and settings worldwide.

“We’ve been pleased to find a growing audience among all age groups. They love songs they can understand, remember and actually sing the words to — today, tomorrow, or even 20 years from now,” says lead singer Jerry Siggins.

A major reason for The Diamonds’ longevity as performers and entertainers lies in the diverse backgrounds of the individual members of the group, which include Sean Sooter, Jerry Siggins, Jeff Dolan and Gary Owens.

“Although The Diamonds are four distinctive individuals,” notes Owens, “we have created one strong group personality. The four of us as a unit have a special chemistry, and it is that chemistry that gives us our unique identity.”

The standing ovations and return engagements are the proof: The Diamonds have taken the Classic Rock and Roll genre to a whole new level. The Diamonds truly are – a cut above!

The Diamonds — starring in “Silver Bells and Diamonds” — A Doo-Wop Holiday Musical Spectacular — will appear live at the Sedona Performing Arts Center at Red Rock High School on Monday, Dec. 10 at 7:00 p.m.

Tickets are available at three price levels: $45, $35 or $25. Tickets can be purchased in advance online at www.SedonaFilmFestival.com or www.Sedona30.com. Call 928-282-1177 for details and more information.