Hilary Hahn returns to Sedona on the Big Screen

Sedona AZ (May 21, 2013) – The Sedona International Film Festival is proud to partner with Chamber Music Sedona as it presents the renowned Philadelphia Orchestra on the big screen Sunday, June 2 performing music by Strauss, Korngold and Mahler in high definition. There will be one show at 2:30 p.m. at the festival’s Mary D. Fisher Theatre. 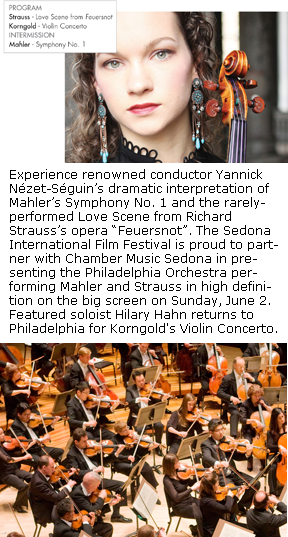 Hilary Hahn was born in Lexington, Virginia and moved to Baltimore in 1983, where she had her first violin lessons. In 1985, she began five years of study with Klara Berkovich who had taught at the Leningrad School for the Musically Gifted for 25 years. In 1990, she entered the Curtis Institute of Music in Philadelphia to study with 83-year-old Jascha Brodsky, the last surviving student of Eugène Ysaÿe. Alongside her solo work and a deep interest in chamber music, she has also collaborated with non-classical musicians.

Renowned for its distinctive sound, beloved for its keen ability to capture the hearts and imaginations of audiences, and admired for an unrivaled legacy of “firsts” in music-making, The Philadelphia Orchestra is one of the preeminent orchestras in the world.

The Philadelphia Orchestra has cultivated an extraordinary history of artistic leaders in its 112 seasons, including music directors Fritz Scheel, Carl Pohlig, Leopold Stokowski, Eugene Ormandy, Riccardo Muti, Wolfgang Sawallisch, and Christoph Eschenbach, and Charles Dutoit, who served as chief conductor from 2008 to 2012. With the 2012-13 season, Yannick Nézet-Séguin becomes the eighth music director of The Philadelphia Orchestra. Named music director designate in 2010, Nézet-Séguin brings a vision that extends beyond symphonic music into the vivid world of opera and choral music. He has also been Artistic Director and Principal Conductor of the Orchestre Métropolitain (Montreal) since 2000, and has conducted all the major ensembles in his native Canada.

The Philadelphia Orchestra concert will be shown at the Mary D. Fisher Theatre one day only: Sunday, June 2 at 2:30 p.m. Tickets are $15, or $12.50 for Film Festival or Chamber Music members. Tickets are available in advance at the Sedona International Film Festival office or by calling 282-1177. Both the theatre and film festival office are located at 2030 W. Hwy. 89A, in West Sedona. Visit www.SedonaFilmFestival.org for details.