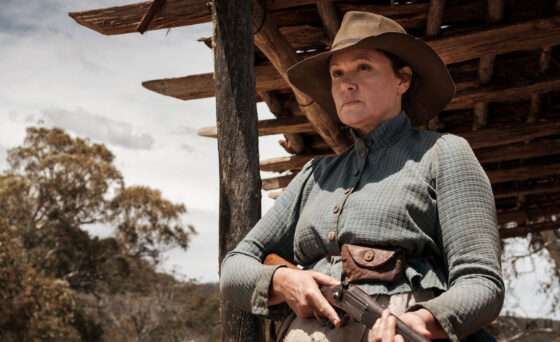 “The Legend of Molly Johnson” is a reimagining of Leah Purcell’s acclaimed play and Henry Lawson’s classic short story. A searing Australian revenge tale and a stark revisionist Western, the film offers a powerful new interrogation of Australian history and a universal story of what a mother will do to protect her children.
Share
Facebook Twitter LinkedIn Pinterest Email Reddit WhatsApp

Sedona News – The Sedona International Film Festival is proud to present the encore of “The Legend of Molly Johnson” showing Aug. 19-25 at the Alice Gill-Sheldon Theatre.

“The Legend of Molly Johnson” premiered at the recent Sedona Film Festival to rave audience reviews and was one of the highest rated films in the festival lineup. It is returning to Sedona by popular demand.

In 1893 on an isolated property, a heavily pregnant woman named Molly Johnson (Leah Purcell) and her children struggle to survive the harsh Australian landscape; her husband is gone, droving sheep in the high country.

Molly then finds herself confronted by a shackled Aboriginal fugitive named Yadaka (Rob Collins). As an unlikely bond begins to form between them, secrets unravel about her true identity. Meanwhile, realizing Molly’s husband is missing, new town lawman Nate Clintoff becomes suspicious and sends his constable to investigate. The deadly encounter between Molly, Yadaka and the constable results in a tragic chain of events with Molly becoming a symbol of feminism and anti-racism.

“The Legend of Molly Johnson” is a reimagining of Leah Purcell’s acclaimed play and Henry Lawson’s classic short story. A searing Australian revenge tale and a stark revisionist Western, the film offers a powerful new interrogation of Australian history and a universal story of what a mother will do to protect her children.