Film and Concert at Tequa Marketplace to Celebrate Summer

‘Everything Must Go’  Cinema Under the Stars

The Sedona International Film Festival is proud to present “Cinema Under the Stars” at Tequa featuring the exclusive Northern Arizona premiere of the new indie comedy/drama “Everything Must Go” on Tuesday, June 21. There will be one screening of the film outdoors at the Tequa Marketplace courtyard in the Village of Oak Creek. 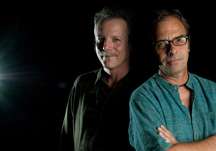 A live concert performance by “Generations” — which includes Ralf Illenberger, Rick Cyge and Alex Gorchesky — will kick off the evening at 7 p.m. Come early, bring lawn chairs and blankets … and enjoy the sounds of these renowned performers! The film will follow the concert at dark.

“This promises to be an extraordinary night of music, film and fun as we celebrate summer with the second of our five planned ‘cinema under the stars’ events,” said festival director Patrick Schweiss. “Where else can you experience incredible music along with an award-winning film under the beautiful Sedona night skies?”

“Everything Must Go” stars Will Ferrell and a gifted ensemble cast including Rebecca Hall, Laura Dern, Michael Pena and Christopher Jordan Wallace.

Adapted and directed by Dan Rush, and based on a short story by Raymond Carver, “Everything Must Go” tells the story of Nick Porter (Will Ferrell) a career salesman whose days of being on top are long gone. The same day Nick gets fired, for falling off the wagon one last time, he returns home to discover his wife has left him, changed the locks on their suburban h

“Everything Must Go” stars Will Ferrell and a gifted ensemble cast including Rebecca Hall, Laura Dern, Michael Pena and Christopher Jordan Wallace. The film makes its Northern Arizona premiere at “Cinema Under the Stars” on Tuesday, June 21 at Tequa Marketplace in the Village of Oak Creek. The event is presented by the Sedona International Film Festival.

ome and dumped all his possessions out on the front yard.

Faced with his life imploding, Nick puts it all on the line — or more properly, on the lawn — reluctantly holding a yard sale that becomes a unique strategy for survival.

When writer-director Dan Rush read Raymond Carver’s short story, “Why Don’t You Dance?,” he realized that he had found the source material he was looking for.

“I thought I needed to write something with a great role for an actor,” said Rush. “Here was the tale of a man whose marriage falls apart and who finds his belongings dumped out in his yard. He then rearranges the furniture on his front lawn so that he can watch television and listen to his record player.”

Will Ferrell was immediately attracted to the script. “It constantly ebbs and flows between these extremely sad, serious moments and these situations that are really humorous,” said Ferrell. “It’s not afraid to be emotional, it’s not afraid to be touching, but what I loved most about it is that it’s ambiguous at times – it gives the audience the opportunity to work things out for themselves.”

In the end, Rush hopes that the film will inspire the same passion in an audience as it did in him and his cast. “For me, the greatest movies — whether big or small — are movies that move me and make me think differently about the world or myself or my friends. So hopefully, when you come out of the movie you’ll be thinking about it. You’ll be thinking about this character’s journey and how it relates to you.”

Food and beverages will b

“Everything Must Go” tells the story of Nick Porter (Will Ferrell) a career salesman whose days of being on top are long gone. The same day Nick gets fired, for falling off the wagon one last time, he returns home to discover his wife has left him, changed the locks on their suburban home and dumped all his possessions out on the front yard.

e available for purchase from the Tequa Marketplace restaurants. Guests are encouraged to bring lawn chairs, blankets and beach towels.

The title sponsor for the event is Kealyn’s Kloset, Fine Apparel Consignment and Resale. The venue sponsor is Tequa Marketplace. The series is also made possible by a grant from the Arizona Commission on the Arts and National Endowment for the Arts, the City of Sedona and the Sedona Community Foundation.

“Everything Must Go” will be shown outdoors at Tequa Marketplace in “Cinema Under the Stars” on Tuesday, June 21, with a pre-film concert beginning at 7:00 p.m. Tickets are $12, ($6 for full time students) or $9 for Film Sedona members, and will be available starting at Tequa beginning at 6 p.m. that evening. Cash or checks only. Film Sedona members can purchase tickets in advance at the Sedona International Film Festival office, 2030 W. State Route 89A, Suite 3A in West Sedona, or by calling 282-1177. For more information, visit: www.SedonaFilmFestival.com/.