Second in the series of TED2017: The Future You hosted on screen at Fisher Theatre

You have seen TED Talks. But you have never experienced TED — the global phenomenon propelled by ideas that are transforming the world — until now. TED Cinema Experience will bring TED’s flagship event, TED2017: The Future You from Vancouver, Canada, to cinema audiences around the world in these big screen events. 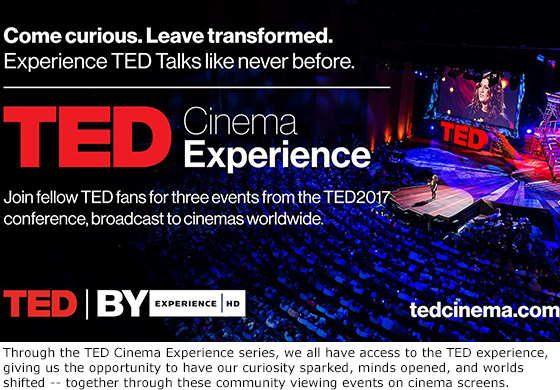 Cinema-goers will get to watch with their communities as the TED Prize winner receives a $1 million award towards a creative, bold wish to spark global change. By investing in a powerful idea every year, the TED Prize accelerates progress toward solving some of the world’s most pressing problems. The session will also feature an update from a former TED Prize winner, as well as talks from exceptional TED speakers.

Awe. A sense of wonder. Life changing. Inspirational. All words used to describe the experience that is TED. Now TED Cinema Experience brings TED2017 to you.

TED2017 will explore the deepest scientific and psychological insights, the latest medical advances, and thrilling new inventions (all mixed with a dose of ancient wisdom), and will ask questions about our present and future selves that we often don’t have time for. The program will feature a succession of extraordinary speakers — risk-takers, visionaries, celebrities, and an emerging generation of idea creators — who will deliver the “talk of their lives” in TED’s world-famous TED Talk format.

Through the TED Cinema Experience series, we all have access to the TED experience, giving us the opportunity to have our curiosity sparked, minds opened, and worlds shifted — together through these community viewing events on cinema screens. See the world in new ways through your participation in TED Cinema Experience.

The third and final program in the series — TED2017 Highlights Exclusive — will take place on Tuesday, May 16 and will feature a program of highlighted speakers from the entire event. Details will be coming soon.

TED2017: Prize Event will be shown at the Mary D. Fisher Theatre on Tuesday, May 9 at 7 p.m. Tickets are $15, or $12.50 for Film Festival members. Tickets are available in advance at the Sedona International Film Festival office or by calling 928-282-1177 or online at www.SedonaFilmFestival.org. Both the theatre and film festival office are located at 2030 W. Hwy. 89A, in West Sedona.