Sedona AZ (April 11, 2014) – The Sedona International Film Festival is proud to present the Northern Arizona premieres of “Breathe In” and the Academy Award-nominated “Omar” showing April 18-23 at the Mary D. Fisher Theatre.

“Breathe In” pairs writer/director Drake Doremus once again with his incandescent “Like Crazy” star, Felicity Jones. 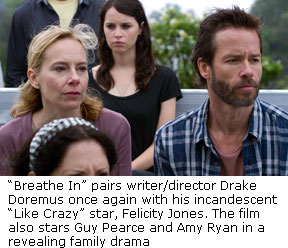 While Keith’s wife, Megan (Amy Ryan) and daughter, Lauren (breakout talent, Mackenzie Davis) focus on Lauren’s final year of high school, Sophie and Keith are drawn ever closer by their mutual longing for creative expression. Ultimately, Sophie and Keith must confront how much they are willing to sacrifice and what they truly want out of life. 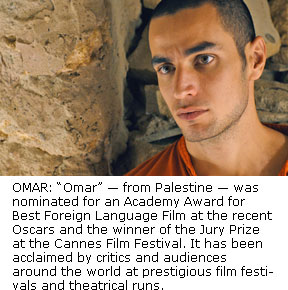 “Omar” — from Palestine — was nominated for an Academy Award for Best Foreign Language Film at the recent Oscars and the winner of the Jury Prize at the Cannes Film Festival. It has been acclaimed by critics and audiences around the world at prestigious film festivals and theatrical runs.

Omar is accustomed to dodging surveillance bullets to cross the separation wall to visit his secret love Nadia. But occupied Palestine knows neither simple love nor clear-cut war. On the other side of the wall, the sensitive young baker Omar becomes a freedom fighter who must face painful choices about life and manhood. When Omar is captured after a deadly act of resistance, he falls into a cat-and-mouse game with the military police.

Suspicion and betrayal jeopardize his longtime trust with accomplices and childhood friends Amjad and Tarek, Nadia’s militant brother. Omar’s feelings quickly become as torn apart as the Palestinian landscape. But it’s soon evident that everything he does is for his love of Nadia.

Critics are calling “Omar” a masterpiece … “the perfect balance of romance and action”, and the Los Angeles Times calls the film “an incredible love story”. Howard Feinstein from Filmmaker Magazine raves “the unpredictable climax to this cat-and-mouse political thriller is pure genius.”