Ongoing 2014 DUI Investigation leads to
arrest of Suspect for Manslaughter

Camp Verde AZ (February 29, 2016) – Ever since the fatal collision in February of 2014, William Jordan who was 36-years-old at the time, insisted that his wife, 30-year-old Stephanie Steel, was driving the SUV involved in the collision off Fossil Creek Road outside of Camp Verde. Steel was pronounced dead at the scene. When deputies spoke with Jordan just before his airlift to a Phoenix hospital, they could detect the odor of an alcoholic beverage on his breath. Throughout the interview, Jordan continued to insist Steel was driving, adding “you’re not going to pin this on me.” Jordan told deputies he believed the brakes had failed while Steel was driving and added that neither of them was wearing a seatbelt. Deputies noted Jordan exhibited no apparent life threatening injuries. Steel had obvious severe visible injuries consistent with her death. Several beer cans were found lying near the SUV. 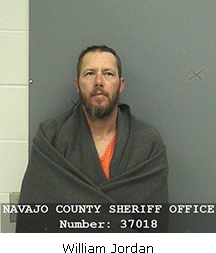 That night, deputies located 2 witnesses who were about a mile behind the SUV as it left the roadway. When the witnesses arrived where the SUV came to rest, they saw Jordan on his knees with Steel laying across his lap outside the passenger side of the SUV. Jordan told witnesses his wife was driving and that the brakes on the car went out. During an initial exam of the SUV, deputies noted the driver’s seat position better suited Jordan’s height of about 6’ as opposed to Steel’s height at 5’ 04”.

The case was assigned to a YCSO detective from the Criminal Investigations Bureau. The SUV was examined by the detective and evidence technicians. They found that the brake reservoir was full and it appeared the passenger seat belt had been cut with a sharp object. The detective also located a witness who placed Jordan in the driver’s seat of the SUV prior to the accident while seen stopped on Fossil Creek Road. The investigation continued over the next several weeks with detectives concluding the following:

Attempts to locate Jordan last year for a follow-up interview were unsuccessful. A warrant was eventually issued for his arrest. On February 23, 2016, Jordan was located in Snowflake, Arizona, and arrested on unrelated charges. YCSO detectives interviewed Jordan and he admitted to driving the SUV at the time of the collision after drinking several beers and smoking marijuana. Jordan remains in-custody in the Navajo County Jail pending court proceedings on the unrelated charges. Following adjudication, it is expected Jordan will be booked into the Camp Verde Detention Center on charges including Manslaughter, DUI, DUI Drugs, and Aggravated DUI while driving on a Suspended License.

Camp Verde AZ (February 10, 2014) – PRELIMINARY INFORMATION – On February 8, 2014, just before 6 PM, Yavapai County Sheriff’s Office deputies were dispatched to a traffic accident on Fossil Creek Road, approximately 19 miles from Highway 260, in Camp Verde. A 2001 white Isuzu Rodeo SUV was found about 100 feet from the dirt road down along a hillside. Camp Verde Fire personnel were already on scene and indicated a 30-year-old female, identified as Stephanie Steel, had been pronounced dead. A 36-year-old male, identified as William Jordon, was being treated by paramedics. William indicated Stephanie was his wife and driver of the vehicle. They reside in Phoenix.

Deputies spoke with William briefly as he was being prepared for flight to John C. Lincoln hospital in Phoenix. William stated that he and Stephanie had driven from Phoenix intending on camping at the Verde hot springs near the Child’s campground. William further explained that when road conditions became difficult, Stephanie was unable to prevent their vehicle from going over the side and crashing. He admitted neither one of them were wearing seatbelts.

Deputies found open beer cans in and around the vehicle at the crash site.

The investigation remains ongoing regarding verification as to the driver of the vehicle at the time of this collision and specific causal factors. Cause of death is pending Medical Examiner findings. Deputies are also interviewing witnesses who were in the area when the crash occurred.