Exhibition on Screen: ‘The Impressionists’ premieres in Sedona Nov. 20

Sedona AZ (November 10, 2017) – Sedona International Film Festival presents the Exhibition on Screen series with “The Impressionists”. The event will show in Sedona on Monday, Nov. 20 at 4 and 7 p.m. at the festival’s Mary D. Fisher Theatre.

They are the world’s most popular artists. The works of Cezanne, Monet, Degas and their compatriots fetch tens of millions of dollars. But just who were they really? Why and how did they paint? What lies behind their enduring appeal? 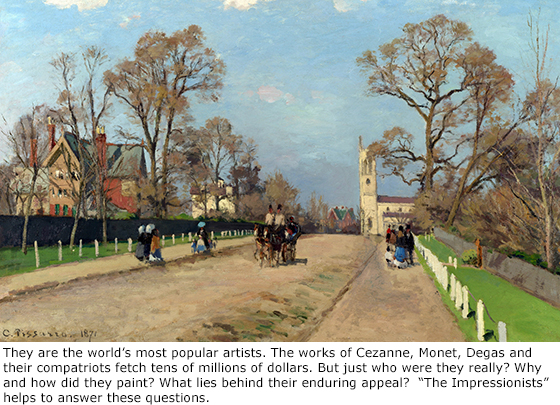 To help answer these questions, the film has secured unique access to a major new exhibition focusing on the 19th century Parisian art collector Paul Durand-Ruel, the outspoken champion of Impressionism. It was his continual support, championing, financial backing and refusal to give up that established one of the most loved and recognizable movements in Western art — Impressionism.

This eagerly anticipated exhibition is perhaps the most comprehensive ever held about the Impressionists. Durand-Ruel’s brave decision to exhibit the Impressionists in New York in 1886 introduced enlightened, wealthy Americans to modern French painting. In doing so, he not only filled great American galleries with Impressionist masterworks but also kept impressionism alive at a time when it faced complete failure. This energetic and revealing film will tell his remarkable story along with that of the Impressionists themselves.

The film charts Durand-Ruel’s relationship with  artists including Manet, Monet, Degas, Cézanne, Renoir and Pissarro, and his determination to support them in the unforgiving environment of 19th Century Paris, through the Franco-Prussian war, alongside dealing with the blows of his own personal life. From the artists’ early struggles to be accepted at the Salon, to the widespread ridicule and derision that followed when their work was exhibited in Paris, to his brave decision to exhibit these revolutionary and radical new artists in America, the film follows Durand-Ruel’s extraordinary story that finally brought the Impressionists the worldwide respect that they sought and changed the art world forever.

Alongside the opportunity to see some of the Impressionist’s most famous works up close on the big screen, the film offers diary extracts and insights from Durand-Ruel and the artists in their own words, with Durand-Ruel voiced by Robert Lindsay.

Featured paintings include Eugene Delacroix’s Interior of Dominican Covent in Madrid, Berthe Morisot’s Hanging the Laundry out to Dry, Claude Monet’s Poplars and Pleasure Boats, Camille Passarro’s The Avenue, Sydenham and Entrance to the Village of Voisins and Alfred Sisley’s L’Ile Saint-Denis.

“The Impressionists” will be shown at the Mary D. Fisher Theatre on Monday, Nov. 20 at 4 and 7 p.m. Tickets are $15, or $12.50 for Film Festival members. Tickets are available in advance at the Sedona International Film Festival office or by calling 928-282-1177 or online atwww.SedonaFilmFestival.org. Both the theatre and film festival office are located at 2030 W. Hwy. 89A, in West Sedona.