Sedona AZ (February 17, 2014) – On Saturday, March 1 Sedona will experience a bit of World War II history when a B-25BJ Mitchell bomber arrives for a one day visit. The aircraft is participating in an historic “war-bird” fly-in in Phoenix that weekend along with a variety of military trainer type aircraft, such as T-34’s and T-6’s which will also fly into Sedona. The pilots will fly in formation before descending and landing at the airport. The public is invited to witness this event at the airport. After the planes have parked, the public can walk around the aircraft and meet the pilots. 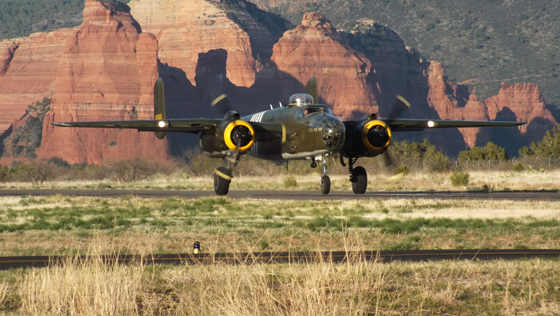 The historic B-25J Mitchell, named “Executive Sweet” will be offering “rides” to individuals who want to experience what it was like to fly in this historic warbird. The flight will be for 30 minutes and each passenger will have full access to the aircraft including the opportunity to sit in the front and rear gun turrets while in flight. The aircraft can hold 6 passengers per flight. While on the ground, the public will be able to inspect the interior and exterior of the “Executive Sweet.”

The B-25J and accompanying war-birds will arrive in Sedona around 10:00 in the morning and depart later in the day. They will be eating lunch at the Mesa Grill Restaurant before heading back to Deer Valley Airport in Phoenix, the site of the war-bird fly-in.

The American Aeronautical Foundation owns this B-25J and is a non-profit organization founded to preserve the aviation legacy of our World War II veterans and the aircraft they flew. All the crew members are volunteers and 100% of the money raised on rides goes directly back into the B-25J’s upkeep. The historic aircraft will return to its home on Sunday, the 2nd in Camarillo, California.

This aircraft visited Sedona in March of 2013 and flew six aerial missions around Sedona with a full crews of locals and visitors who made the donation flights. John Wiebener, representing the AAF Group said that day was its most successful fund raising experience for the Executive Sweet. “This will be our 3rd visit to Sedona and if past experience is something of a predictor, we expect another outpouring of people and fun! There must be some “magical connection” between our WWII B-25 Bomber and the community of Sedona. We have never had this much support from any community – and the airport staff has been wonderful, providing us with a 1st class ramp and services. We can’t thank the people of Sedona enough for helping us succeed in our mission to preserve the Executive Sweet,” he concluded.”

Wiebener added, “We plan to arrive right around 10 a.m. on the 1st of March.  We will give rides every hour for as long as people are still signing up for rides.  Be sure to book early – as in the past there have been long lines and waits!”

Wiebener said their Ride Program is the only thing that keeps Executive Sweet flying. He said the cost of parts and maintenance to keep this 70 year flying machines in the air is a real struggle. “Without a dedicated team of volunteer maintainers, support personnel, and pilots – all of us wouldn’t be able to experience this piece of history.  So when people book a ride on our B-25; they are helping fund the continued efforts to be able to show others what our brave men and women in the military did for us!,” Wiebener concluded.

On a historic note, the B-25J is the aircraft flown by Jimmy Doolittle on the historic “surprise” mission over Japan in April of 1942. Doolittle earned the Medal of Honor for his valor and leadership as commander of the Doolittle Raid. The raid caused negligible damage to Japan, but it succeeded in its goal of helping American morale just four months after Pearl Harbor and casting doubt in Japan on the ability of the Japanese military leaders. Residents of the area who might have actually been a crew member on a B-25J are given the honor of signing the ship’s bomb bay doors.

Executive Sweet was built in Kansas City in 1944 as a B-25J, and saw extensive stateside service throughout the war as a crew trainer. She was acquired by Hollywood’s Filmways Studios in 1968 where she became the lead “on camera” aircraft named “Vestal Virgin” in the film  Catch-22. In 1972 the aircraft was put through a two-year restoration program to bring her back to the appearance of an authentic wartime J model. Looking factory – new in its restored bare metal finish, “Executive Sweet” was once again armed with thirteen .50 caliber machine guns, a “Norden” bombsight , operable bomb bay, authentic insignia and interior detailing down to crash axes and a crew intercom system. In 1982, the aircraft was donated to the newly formed American Aeronautical Foundation at Camarillo Airport, in Southern California. Since then, Executive Sweet has appeared in a dozen major films and numerous TV shows and commercials

Rod Propst, General Manager of the Sedona-Oak Creek Airport Authority, the non-profit organization which operates Sedona Airport said the airport is honored to have such historic aircraft visit Sedona and wants to invite the public to come up to the airport terminal around 10 a.m. on Saturday, March 1st to witness their arrival. The aircraft’s visit is expected to end mid-afternoon. “When Sedonan’s hear the buzz of a host of aircraft and look to the skies, they will see the B-25B Mitchell being escorted by other WWII era war-birds as they arrive and descend to the airport for their short visit.” “They won’t be here very long, but the sight should be memorable,” he added.