Eric Williams performs in the Village of Oak Creek

Sedona AZ (January 28, 2012) – Born in Butler, Pa Eric was always interested in old things, old cars in particular and music. He received his Masters in Music from Youngstown State University,Ohio. Eric has been using his amazing musical talents twenty years to delight audiences. He sings, plays piano, guitar, saxophone and harmonica and a dozen other instruments. He is an accomplished musician, composer and recording artist with an extensive repertoire in jazz, blues, rock and popular songs of the 1920’s through today. 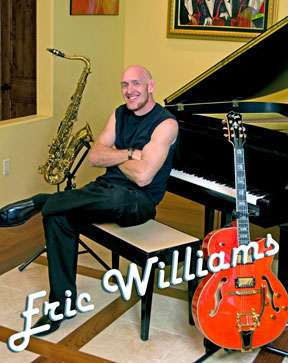 Eric has released a CD of his original music some of which can be heard on his myspace page. Eric can be found performing in and around Sedona, AZ. Recently a member of the Sedona Performers Guild you will find him on their website as well. With influences like Muddy Waters, Leon Redbone, Louis Armstrong, Ray Charles, among, Eric is very popular and in constant demand You will be happily entertained while Eric fulfills your music requests. Eric is also well known as a music teacher in the Sedona Area.
He will be performing at the Marketplace Cafe, Friday Feb 3, from 6-9pm. You can make reservations by calling 928-284-5478
Eric Williams marketplace cafe