Sedona AZ (October 18, 2011) – Sometimes it’s hard to know true love when you see it. But you will love this play right off the bat! Embraceable Me is a touching romantic comedy with earnestness, wit and charm that are sure to win over even the most hardened theatre-goers heart.

Embraceable Me, the comic and passionate play by Victor L. Cahn, runs October 13 through October 30 at Canyon Moon Theatre. 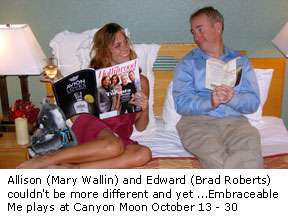 Edward is smart, shy and quirky, while Allison is sexy, dramatic and vulnerable. This comic and passionate “He said – She said” traces the twenty-year journey of these unlikely friends as they struggle to resolve their feelings for the most important person in their lives. “Actually left me smiling, uplifted, and hopeful about the possibility of love’s endurance…” -NYTimes.com

Gail Edwards, the director, has directed “Maybe Baby, It’s You” and “Jerry Finnegan’s Sister” for Canyon Moon Theatre and currently serves as Associate Artistic Director. She also wrote, produced, and starred in the off-Broadway musical “Becoming.” While in New York, she landed the role of “Sandy” opposite Peter Gallagher in Broadway’s East Coast tour of “Grease.” Edwards also landed roles in several television shows, guest-starring on “Happy Days,” “Lou Grant,” “M*A*S*H” and “Taxi”, being a series regular as Dot Higgins on ABC’s “It’s a Living”, and having recurring roles on “Full House” and “Blossom”.

Mary Wallin (Allison) hails from Wisconsin, with a degree in Theatre Performance and Design/Tech. Mary has been onstage at CMT in Barefoot in the Park, Twelfth Night, Panache, and most recently, Leaving Iowa.

Embraceable Me plays Thursdays through Sundays, October 13 through October 30. Tickets for the first week of performances are $16. For the second and third weeks of performances, tickets are $20. Full-time student tickets are $11. To purchase tickets or for information on Season subscriptions, call CMT at 928-282-6212. Tickets are also available at Rycus’ Corners and Marketplace Café in the VOC and at Basha’s in West Sedona. Thursday through Saturday, shows are at 7:30 p.m.; Sunday performances are at 3:00 p.m. Canyon Moon Theatre is located in the Oak Creek Factory Outlets, next to Village Pet Supply and Grooming on Highway 179 in the Village of Oak Creek.