Camp Verde AZ (July 7, 2015) UPDATE – YCSO deputies have provided additional information regarding the actions of the victim’s 39-year-old uncle during this incident.

As the uncle and his nephew were attempting to re-cross the river to return to their vehicle, the uncle told deputies he stepped off a ledge into the water estimated at 7 feet deep. His nephew was holding his arm at the time and both became submerged. His nephew began to panic and pull on his face and neck. During the struggle, the uncle attempted to grab a rock ledge he could feel nearby in hopes of pulling them both out of the water. 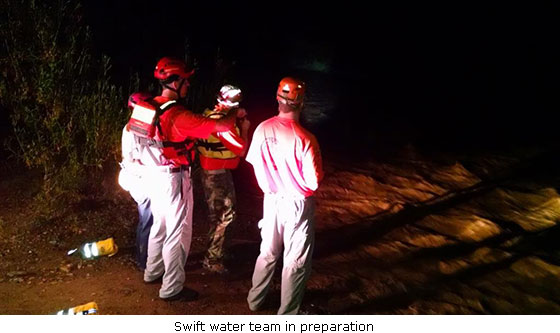 Due to his nephew’s position on top of him, he was unable to swim upward and began swallowing a lot of water and feeling as though he was going to drown. He attempted to push his nephew towards the shoreline but was not successful as his nephew continued to panic and would not let go. Finally the uncle separated from his nephew’s grip, was able to surface and head to the shoreline hoping to catch a breath and return to rescue his nephew. He made it near the shoreline and realized he had aspirated water during the struggle to get to the surface. He saw his nephew continuing to panic in the water, and then quickly go under without resurfacing.

After catching his breath, the uncle told deputies he re-entered the water to look for his nephew while screaming for help. Two males come by but would not assist him. A short time later, another man approached him and offered to call 911, but the man had to walk out of the canyon to get cell coverage. 3 female teenagers also heard the screaming and assisted him by trying to locate the victim until fire officials arrive on scene.

EMS personnel treated the uncle at the scene for breathing difficulties.

Deputies indicated no evidence of foul play. The 8-year-old’s body was transported to the Medical Examiner for follow-up. Deputies drove the victim’s mother to the scene from Prescott Valley to meet with officials and other family members.

The victim is identified as 8-year-old Dimas Mendez from Prescott Valley.

Camp Verde AZ (July 5, 2015) – On July 4, 2015, at 5 PM, YCSO deputies were dispatched to the Beasley Flat recreation area on the Verde River southeast of Camp Verde. (This is in the Coconino National Forest). The initial report came from an uninvolved third party saying that a teenager had been swimming in the river and disappeared. Several people were looking for him, but were unsuccessful so far. Deputies began immediately coordinating additional personnel to assist including DPS Ranger helicopter, YCSRT Backcountry Unit, and Volunteers in Protection. Camp Verde Fire District crews had already deployed and called out their Swift Water Rescue Team. Around 5:45 PM, four members of their team went into the water where the boy was last seen and about 15 minutes later, he was located down river in about 4 feet of water at the river bottom. He was brought out of the water with no signs of life and pronounced deceased from apparent drowning.

Deputies interviewed the victim’s uncle near the scene who told them he had taken his 8-year-old nephew to the east side of the river to look at some caves up on the cliff. They swam across the river, looked at the caves and started back across the river about 30 min. later. As they were nearing the shore the uncle, who was apparently carrying the boy on his shoulders, stepped in a deep hole and both went underwater. The uncle swam to the shore and turned back to get his nephew but he could not reach him. The boy slipped from sight and was not seen again. The uncle began screaming for help and a nearby citizen called 911, but could offer very little information as he was not a witness to the incident. Several people nearby helped to look for the boy but they were unable to find him in the river or on the shore.

The boy’s mother was at home in Prescott Valley when the incident happened. She was escorted to the scene and briefed about the circumstances regarding her son’s death. A member of the Trauma Intervention Program (TIPS) arrived to aid the family with counseling services following this tragic incident.

The following was provided by the Camp Verde Fire District’s Jon Hilton regarding their search and recovery of the drowning victim.

“On July 4th  at about 16:58 hours, the Camp Verde Fire District was dispatched for a report of an 8 year-old drowning victim in the area of Beasley Flats on the Verde River.  It was reported that the victim was still submerged in the river, and had been for approximately twenty minutes. When the crew arrived on scene they made contact with family and a Yavapai County Sheriff’s Officer. They were directed to the last known location of the victim, which was approximately twenty feet from the shoreline. A recon of the area was conducted to define the starting search boundaries.

Upon the arrival of additional resources, Beasley Command was established and the crews were briefed to begin a grid search starting at the last known location in the water. Requests to dispatch were made for an Arizona Department of Public Safety helicopter and YCSO Search and Rescue to assist in the search operation.  A crew of three CVFD swift water rescue  technicians entered the water in full protective gear at approximately, while another team of two personnel were used for shore based coordination and search. The depth of water within the search area was calm and between one foot to seven feet deep.  The USGS gauge at Camp Verde was registering a flow of 40 cubic feet per second at the time of the incident. After completing the search in the primary grid area, it was expanded downriver approximately 50 feet, and the victim was located submerged in about 4’ of water at 18:01.

The victim was removed from the water to the shore and rapidly evaluated. There were unfortunately no signs of life, as the submersion time was over an hour by this time. YCSO officers were advised of the removal and condition of the victim, and they relocated to the scene. The victim was confirmed deceased, and incident command was terminated. CVFD Rescue 811 remained on scene for a short period of time to coordinate with and assist YCSO and to support the family of the deceased.”