“News is what people want to keep hidden; everything else is publicity.”– George Orwell

Sedona.biz will highlight the importance of transparency and fiscal accountability in local government, and all those who fight for it by launching a series. The first is titled, “COTTONWOOD, ARIZONA–SMALL CITY WITH BIG PAY BUBBLE” by investigative reporter, Sherry Twamley.

It is our way of shining a light on some of our local activists and investigative journalists who are keeping the public informed to hold local government accountable and expose conflicts of interest. We also want to hear what you see, hear, feel, count, and about all things which you have an opinion.”

Cottonwood AZ (March 30, 2017) – In a series called, “Cottonwood AZ – Small City with Big Pay Bubble”, Sherry Twamley talks about her investigation that reveals multiple municipal problems and their impact on the City of Cottonwood, AZ’s taxpayers and city water utility bill payers. She has reviewed thousands of pages of documents to find hidden financial dealings of current and former city leaders and public officials, examined dozens of public utility records and city council appointed officials’ employment contracts, and conducted live interviews to expose how city employees are receiving exorbitant compensation packages as compared to cities of comparable size and services. 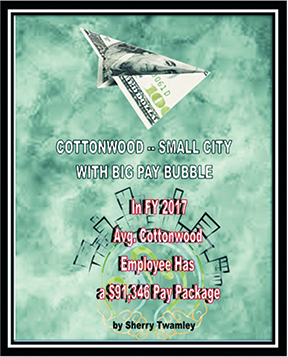 Every new revelation, writes Twamley, “sheds disturbing light on this small central Arizona city with 11,800 population which has no rules. It’s about a city that wielded enormous power to build its water empire and control all of the local water sources, and fostered a city culture that celebrates self-enrichment and crony capitalism–one that treats the mayor and city manager’s inner circle as literally exempt from the rules of ethics, transparency and financial accountability. The series starts with the backstory behind Cottonwood’s six murky private water company acquisitions between 2004 to 2010–mostly outside city boundaries–which were used to fund more than $70 million in real estate investment costs–without voter authorization pursuant to statutory law–which the City’s 9,124 city water utility consumers are now forced to repay over 30 years, to funds shuffled from the city’s water utility to the city’s wastewater division to fund capital improvements, and alleged ‘inappropriate expenditures’; and the dark past of a few senior officials–including three fired police chiefs.