Sedona AZ (October 23, 2015) – Rabbi Alicia Magal and Council Member Angela LeFevre will hold the fourth in the “Coffee Talk” series, held the First Tuesday of the month, on November 3, from noon to 2 p.m.at Java Love Cafe, 2155 Hwy 89A, Suite 118, near the Harkins Plaza in West Sedona. This series was formed to encourage and enable members of the Sedona community to meet informally with Rabbi Magal, who serves the Jewish Community of Sedona and the Verde Valley, and with Angela LeFevre, who serves on the Sedona City Council. 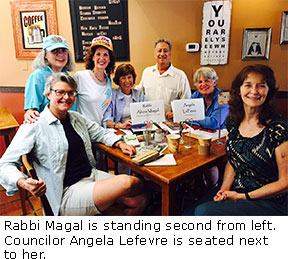 People who attended previous Coffee Talk meetings were eager to ask questions and share their concerns. LeFevre and Magal sit at separate tables, so visitors bought coffee or tea and then spoke with one and then the other. LeFevre does not represent the entire Council, and comes as an individual, but wishes to offer information and answer questions about issues concerning the city. Magal answers questions about spirituality to people of all backgrounds. As the old Levy’s Rye Bread commercial used to say, “You don’t have to be Jewish…”

Members of the Sedona community are invited to drop by the Java Love Cafe on Tuesday, November 3, from noon to 2 p.m. for this informal meeting. The Coffee Talk series will continue on the First Tuesday of the month through January, 2016.