Celebrate Fisher Theatre 6-year anniversary:
‘The Phantom of the Opera’

Sedona AZ (March 23, 2018) – Broadway returns to Sedona on Sunday, April 1 when the Sedona International Film Festival celebrates the 6-year anniversary of its Mary D. Fisher Theatre by hosting the big screen encore of Andrew Lloyd Webber’s biggest and most celebrated musical “The Phantom of the Opera”. There will be two shows at 3:00 p.m. and 7:00 p.m. All tickets are only $6 each in honor of this special 6-year anniversary celebration.

“We are honored to bring back the musical event that we presented when we opened the theatre six years ago,” said festival director Patrick Schweiss. “This special encore is our way of saying thank you to all of Sedona and the Verde Valley for supporting our theatre, our festival and all of our events.”

A few years ago, in celebration of the 25th Anniversary of Andrew Lloyd Webber’s “The Phantom of the Opera”, Cameron Mackintosh produced a unique, spectacular staging of the musical on a scale which had never been seen before. Inspired by the original staging by Hal Prince and Gillian Lynne, this special event features over 200 cast members, orchestra musicians and luminaries involved with “The Phantom of the Opera” over the past 25 years. 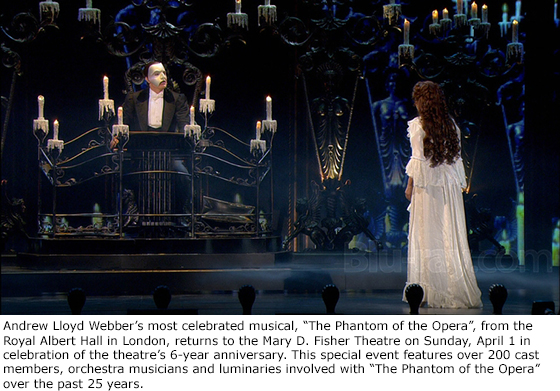 With a fully-staged, lavish production, set in the sumptuous Victorian splendor of the Royal Albert Hall in London, the event has captivated cinema audiences around the world. “The Phantom of the Opera” is Broadway’s longest running show and has been seen by over 100 million people worldwide.

Far beneath the majesty and splendour of the Paris Opera House, hides the Phantom in a shadowy existence. Shamed by his physical appearance and feared by all, he haunts the grand Paris Opera House. Sheltered from the outside world in an underground cavern, the lonely, romantic man tutors and composes operas for Christine Daaé, a gorgeous young soprano star-to-be. The love he holds for his beautiful protégée Christine is so strong that even her heart cannot resist. As Christine’s star rises, and a handsome suitor from her past enters the picture, the Phantom grows mad, terrorizing the opera house owners and company with his murderous ways. Still, Christine finds herself drawn to the mystery man.

“The Phantom of the Opera” will be shown at the Mary D. Fisher Theatre on one day only: Sunday, April 1 at 3:00 and 7:00 p.m. All tickets are only $6 for this special 6-year anniversary celebration. Tickets are available in advance at the Sedona International Film Festival office or by calling 928-282-1177 or online at www.SedonaFilmFestival.org. Both the theatre and film festival office are located at 2030 W. Hwy. 89A, in West Sedona.