Prescott AZ (February 27, 2016) – During the month of November and December, 2015, 61-year-old Bonnie Staneart of Prescott Valley used the bank card and associated PIN of an 85-year-old victim without permission. Staneart completed at least 12 fraudulent transactions resulting in a loss in excess of $3600. Following a detailed investigation by a YCSO patrol deputy, Staneart was arrested February 24, 2016, on charges including Theft, Identity Theft, Use of Bank Card without consent and Fraudulent Schemes. She was booked at the Camp Verde Detention Center and has since been released on a promise to appear. 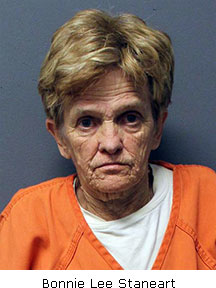 BACKGROUND – On February 1, 2016, a deputy was dispatched to the victim’s Prescott Valley home where she reported money had been taken from her bank account without permission. The victim suspected Staneart, her current caretaker, was involved. Staneart and her boyfriend were allowed to live rent free at the victim’s home in exchange for caretaker services. The victim is unable to drive and has limited mobility. After initially discovering 3 unauthorized transactions on her bank statement, the victim confronted Staneart who readily admitted she was responsible and agreed to pay back the stolen money – a total of $900 at this point. Staneart eventually paid a portion of the money back, but never confessed to any other unauthorized debit card use. When the victim received an updated statement from her bank, she noticed several more unauthorized transactions resulting in a new total loss of $3600. Staneart was confronted and moved out.

The deputy contacted the victim’s bank and requested a copy of certified records for the case. After reviewing records, it was discovered Staneart used the same ATM for every transaction. The ATM was located inside the Wal-Mart store on Glassford Hill Road in Prescott Valley. A review of in store surveillance video documented a majority of the ATM transactions showing Staneart using the victim’s ATM card to withdraw cash.

Early attempts to locate Staneart in the area were unsuccessful as she had apparently moved from the area. On February 24, 2016, Staneart was found at relative’s home on Kings Highway East in Prescott Valley and arrested. After hearing about the evidence obtained in the case, Staneart admitted unauthorized use of the victim’s debit card.

TIP – The victim in this case smartly reviewed bank records on occasion which provided an opportunity to catch the ongoing theft. In cases where a caretaker is provided with access to funds as part of their duties, you should consider using pre-paid debit cards. This method avoids access to a personal checking account and allows much more control of the account based on cash limit and the ability to quickly close the account if fraud is discovered.

Also, take the time to review the background of anyone being hired for such a position. A simple public records check of this suspect’s name would have revealed a prior conviction for identity theft.