Burglar makes himself ‘at Home.’

Sedona AZ (September 29, 2015) – On September 27, 2015, YCSO deputies were dispatched to the 400 block of Sacred Eagle Lane in a remote area of the Village of Oak Creek, Arizona, regarding a burglary in progress. The residents, who had been away for several days, just arrived home to find an unknown man removing furniture from their guest house on the property. They called 911 while convincing him to remain on site pending arrival of deputies. 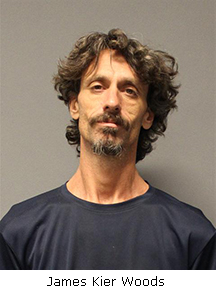 Once on scene, deputies detained 39-year-old James Woods from Prescott who admitted occupying the guest house since September 23, 2015. Deputies discovered Woods had helped himself to food and drinks during the stay. He also opened a recently delivered package containing an $1800 dollar check which he concealed from the homeowners in the guest house. Woods was in possession of keys to the main house that had been hidden on the property. He admitted moving the homeowner’s furniture because the pieces did not suit his style.

Deputies are investigating an additional burglary in the area that may be connected to this suspect.

Woods was booked at the Camp Verde Detention Center on charges including Burglary, Trespassing and Theft. He remains in-custody on a $2500 bond.