Winner of the 2009 Telluride Blues & Brews Festival’s Acoustic Blues Competition and the Indie International Songwriting Contest for Folk/Acoustic, as well as the 2010 Ashland Blues Society’s Road to the IBC, Dana Hubbard’s been described as “a cross between Bruce Cockburn and Jorma Kaukonen”. He combines the socially conscious singer/songwriter with the master acoustic blues guitarist, awing people with guitar skills that defy the ear and eye. 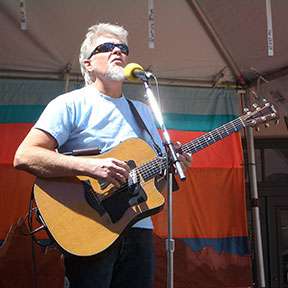 With his acoustic guitar, he busked the streets of Berkeley and San Francisco. He eventually put together his own band, The Delta Twisters which he led for over a decade in the burgeoning Blues scene playing clubs, juke-joints, biker-bars. By the time Dana moved on to bigger venues and theatres, the guitar in hand had become electric and he began sharing the stage with legends like Albert King, James Cotton and Etta James and opening shows for artists like Greg Allman, Chris Isaak and Robert Cray. All that performance experience culminated in his first CD release, “Tummy Lust” which showcases his guitar skills as well as his songwriting.

Dana returned to the acoustic guitar as his instrument of choice with the release of his second CD “Livin’ Live”. What Dana does with the guitar, using only his hands is amazing to watch and a joy to listen to. You hear the bass and the back beat rhythm along with the melody and chords. If you look around for his backup guitar, you won’t find one. This is Dana, performing solo. On his latest CD “The Grounds Keepers” each track is a single guitar performance with no overdubs, no re-makes. What you hear is a singer/songwriter front and center, addressing issues of environmentalism and social injustice in a voice that sometimes growls, sometimes he lilts or laughs, but he’s always got a little twinkle in his eye. He has a social activist soul with a bluesman’s grin.