Phoenix AZ (May 5, 2020) – Attorney General Mark Brnovich is warning the public about an increase in email extortion scam attempts across the country. The Attorney General’s Office recently has received a spike in complaints from members of the public being targeted by this scam.

“Extortion emails like these are designed to cause fear and anxiety. Do not panic and certainly do not respond or engage with the fraudster or send any sort of payment,” said Attorney General Mark Brnovich. “Change your passwords frequently and do not use the same username and password for all of your logins or accounts.”

In these extortion emails, the scammer will typically demand a payment, usually in the form of a digital currency like Bitcoin, but does not provide proof of any photos or videos. To further scare and intimidate the potential victim, the scammer includes a legitimate username and/or password the victim is currently using or has used previously in the title/subject of the email.

Cybercriminals are acquiring large batches of information (often on the Dark Web) such as email addresses, usernames, and passwords that have been illegally obtained from data breaches. They then incorporate that information into their extortion email to make it appear more “realistic” and create a sense of panic and urgency.

In one email, the sender signed off with: “If you do not fulfill it within 24 hours, I’ll create your life a nightmare by sending that video clip to Everybody you know. Your time starts now.”

Examples of language from emails can be seen in the screenshots below: 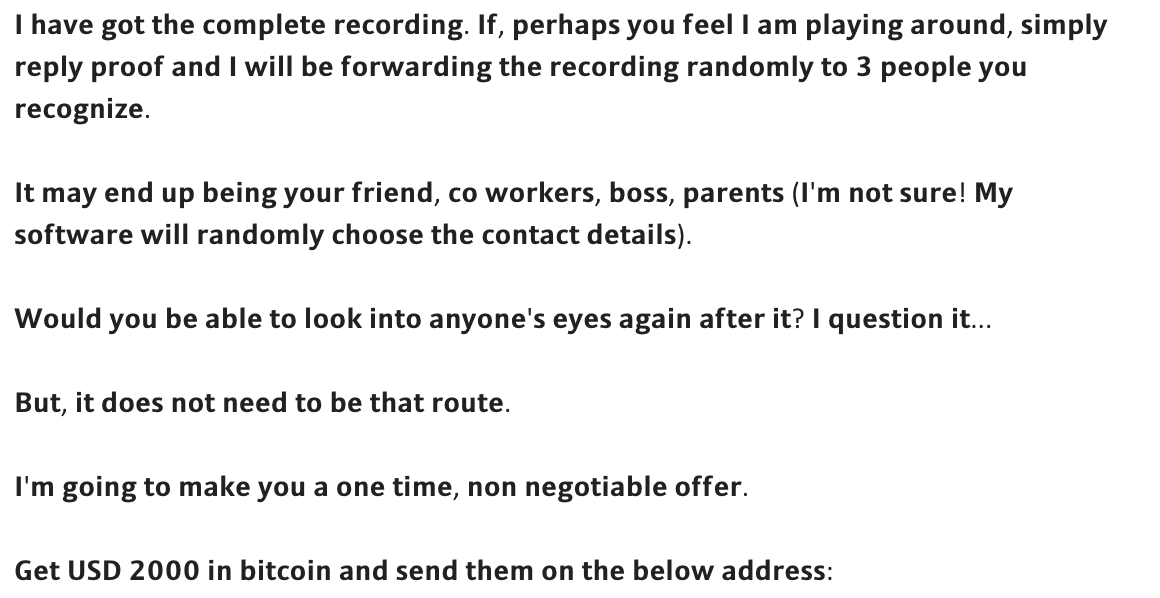 The FBI has identified commonalities of sextortion email scams:

The FBI does not condone the payment of extortion demands as the funds will facilitate continued criminal activity, including potential organized crime activity and associated violent crimes.

If you receive a sextortion threat, contact your local FBI field office and file a complaint through the FBI’s internet crime complaint system https://www.ic3.gov. For more information about sextortion scams, see the FBI’s public service announcement.