“We had so many requests for tickets at Anthony’s Valentine’s Day Concert we decided to bring Anthony back for an ‘encore’ show,” Elena Bullard from OTCA commented.  “His tribute to rock guitarists is sensational.”

For the encore performance Mazzella will feature his electric fingerstyle interpretations of iconic rock covers from Led Zeppelin, Pink Floyd, U2, Hendrix, Van Halen, Santana, Clapton, and others.   Anthony brings a stage full of guitars, each providing a distinct tone and timbre that captures the unique sonic signature of the well known rock classics he performs.   He’ll also play acoustic steel string and classical guitar songs from his recorded repertoire. 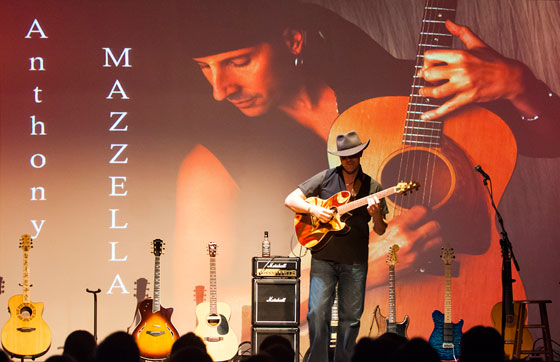 Mazzella is one of the most virtuosic and passionate guitar players in the world today.  His performance career began in New York at Manhattan’s Café Wah, Birdland, CBGB’s and the famous Blue Note, and he has spent years touring the U.S. and world stages as a soloist and as the concert guitarist for world music master Omar Faruk Tekbilek. Among notable appearances, Anthony performed at The Vatican in Rome, Italy where he lived for several years.

Anthony is considered to be among the top guitarists performing in the world today. Come enjoy and evening of timeless classics and original music, from an artist who has innovated new ways to approach and play the guitar.

Tickets for Anthony Mazzella are $15 in advance and $20 at the door.  Tickets are available online at www.showtix4u.com, in Cottonwood at Desert Dancer and Mount Hope Natural Foods; and in Sedona at Crystal Magic.  Old Town Center for the Arts is located at 633 N. 5th Street (5th Street & Main) in Old Town Cottonwood. For more information please visit oldtowncenter.org or call Elena Bullard at 928.634.0940.