Back by popular demand!

Sedona AZ (May 5, 2016) – Guitar Wizard Anthony Mazzella will be returning to the beautiful Mary Fisher Theater for the fourth time on Saturday, May 14 at 7pm after SOLD OUT, standing-room-only performances last fall. He will be performing a new concert of original music as only Mazzella can deliver.

Ranked one of the best guitarists in the world, Anthony Mazzella is an internationally acclaimed virtuoso of the guitar who began his performance career as a concert guitarist in New York City. He quickly built up a strong following performing in most every live music club in Manhattan including: The Bitter End, CBGB’s, Cat Club, Cafe Wah, Birdland etc. 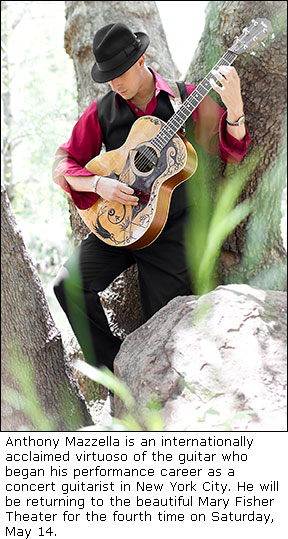 Mazzella then landed a headlining spot at the BLUE NOTE NYC just one year after street performing in front of it and spent the following years touring colleges & universities all over the USA. He then went on to performing on stages all over the world as a solo artist and as the concert guitarist for world music master Omar Faruk Tekbilek.

Mazzella has also performed internationally at events for Wynn Las Vegas, Bellagio, The Mirage, Montage, Nike, Puma to name a few. He has opened for headlining artists, James Brown, Tower of Power, The Commodores, and Spyro Gyra. A notable performance was at The Vatican in Rome Italy where Mazzella lived for several years. His original music is composed with a fusion of world influences consisting of Classical, Flamenco, Jazz, Near Eastern, R&B, Celtic, Rock, New Age and Medieval.

Mazzella began studying music on the violin at age five. He then proceeded to learn the rudiments of music on piano until falling in love with the guitar at age thirteen. Throughout his adolescence he studied with several private guitar teachers, but Mazzella attributes the greater part of his education to ear training. His influences are many, but none more profound than the music and techniques of guitar masters such as Michael Hedges, Pat Metheny, Carlos Montoya, Pepe Romero, William Ackerman, Eddie Van Halen, Andres Segovia and countless others. In the nineties Anthony shared his musical insights by teaching at Knopf Music (where he once took guitar lessons), as a private instructor, and at the Long Island School for Music and Arts. Mazzella was also one of the few chosen understudies of world-renowned guitar master Stanley Jordan.

If you are a fan of guitar music do not miss this world-class virtuoso! Be sure to watch some of Mazzella’s video’s on YouTube or his website www.anthonymazzella.com and get your tickets soon!

Anthony Mazzella in concert will take place on Saturday, May 14 at 7pm. Tickets are only $15 in advance or $20 at the door. For tickets and more information, please call 928-282-1177 or to order online, visit www.SedonaFilmFestival.org. You may also purchase tickets at the Sedona Film Festival office and Mary D. Fisher Theatre, located at 2030 W. Hwy. 89A, in West Sedona.