Verde Valley AZ (June 7, 2016) – On Saturday, June 4, 2016, members of the Backcountry Unit from the Yavapai County Search and Rescue Team participated in the 15th annual Swift Water Expo.  This event is a statewide swift water rescue competition sponsored by the Arizona Hiking Shack and Arizona Department of Public Safety.  The event was held at Saguaro Lake Ranch in Mesa, Arizona, and involved teams representing 6 agencies from throughout the state.  The Backcountry Unit ‘swam’ away with first place, winning the event for the 3rd time in 5 attempts. 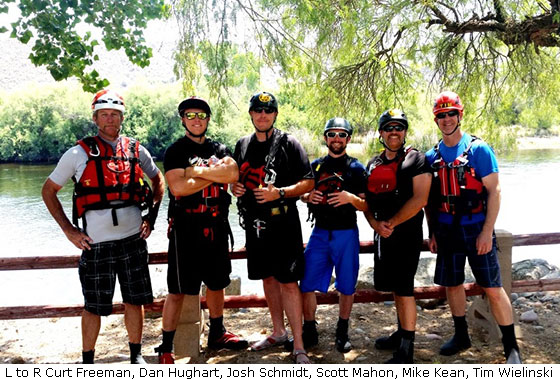 The competition consisted of 6 different stations involving the following scenarios-

The Backcountry Unit would like to thank the Arizona Hiking Shack and AZ Department of Public safety for putting on this great training opportunity.   They would also like to thank all the donors and the Yavapai County Sheriff’s office for their continued support.

The Backcountry Unit is an all-volunteer technical rescue team who rely on grants and donations from citizens like you.  They are also looking for new people to join the team.  For more information on donating or to become a member, please visit YCSRT.org.

This story was submitted by Dan Hughart of YCSRT Swift Water team and provides details on the events that tested the team. Sheriff Mascher is very proud of their effort resulting in the 1st place win. This team has proven invaluable in the recent past regarding river and flooding based rescue operations.