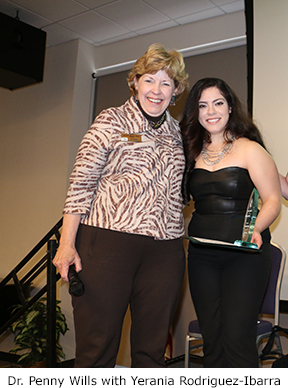 Another top honor — the Vice President’s Award for Academic Excellence — went to YC Verde campus student Jeffrey Kester who was lauded for “striving for excellence in all he does.”

Stephanie Purinton, a 1997 graduate of the YC Nursing Program, was honored as the President’s Outstanding Alumna. Purinton owns and operates a women’s health clinic in Cottonwood, is a certified midwife and a women’s health nurse practitioner. “I am so honored. Yavapai College really made a difference in the beginning of my career,” Purinton said, adding, “Yavapai College allowed me to be a mom, go to school and achieve my goals.”

Also honored as an All-Arizona Academic Team honoree representing the Verde Valley was Kendra Chadborn. She and Rodriguez-Ibarra earned full scholarship awards to an Arizona university of their choice.