Working Inmates continue to
benefit many areas of Yavapai County

Verde Valley AZ (September 25, 2015) – The Yavapai County Sheriff’s Office routinely “employs” inmates housed at the Camp Verde Detention for duties in and outside the Detention Center. Not only do the inmates benefit from positive use of their time, but there is a side benefit of cost savings to county taxpayers. Over the last few months, Camp Verde Detention personnel have continued to seek out and arrange work projects for both men and woman inmates. Following the completion of these tasks, many of the inmates thanked the YCSO security team for the opportunity. Achieving a goal through the process of completing these projects also has the benefit of fostering better attitudes and behavior for the inmates involved. 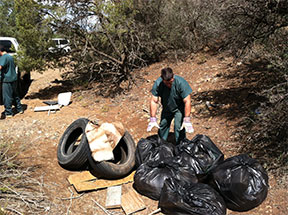 Inmates allowed to participate in these various assignments are screened and considered minimum risk. Their compensation includes credit against the daily meal expense and a small weekly allowance.