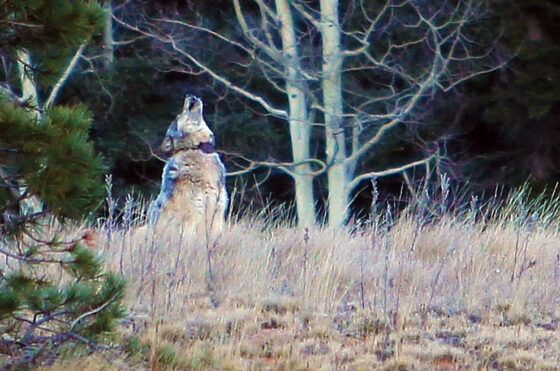 Arizona News – Today, wildlife advocates filed a lawsuit against the U.S. Fish and Wildlife Service (USFWS) for its failure to adopt an adequate management rule for recovering the critically endangered population of Mexican gray wolves as required by the Endangered Species Act. The current management rule falls considerably short of statutory requirements by failing to promote crucial genetic diversity, by leaving wolves vulnerable to human-caused mortality and removal from the wild, and by preventing wolves from occupying suitable habitat north of Interstate 40.

According to the lawsuit, the USFWS rule in question arbitrarily determined that the U.S. population – only about 200 Mexican gray wolves remain in the wild – is “not essential” to the species’ long-term survival. It also downplayed the genetic risks the wolves face. Experts confirm that the recovery of the Mexican gray wolf is still possible within the next several decades if USFWS moves quickly to alleviate threats and acts swiftly to improve the genetic diversity of the population.

“Mexican wolves’ recovery is being hampered by politically motivated management decisions, like arbitrary population goals and geographic boundaries that fall short of what the species truly needs,” said Greta Anderson, deputy director of Western Watersheds Project. “Mexican wolves won’t be on a path to real recovery until the scientific recommendations are no longer being watered down by policies that appease the states and special interests.”

“The U.S. Fish and Wildlife Service should treat our single, vulnerable population of Mexican wolves in the wild as ‘essential’ to the survival of the species,” said Sally Paez, staff attorney for New Mexico Wild. “We urge the court to reject the Service’s justification of lesser protections for Mexican wolves based on improper reliance on the genetically impoverished captive population and a small population of wolves in Mexico.”

“Sadly, the cycle of bad faith government efforts necessitating litigation continues,” said Chris Smith, southwest wildlife advocate for WildEarth Guardians. “The U.S. Fish and Wildlife Service knows exactly what it needs to do in order to further lobo recovery – a federal court told the agency – but unfortunately they won’t do it without being sued over and over again.”

“Allowing wolves to roam north of I-40 and seek out new habitat is essential to their long-term survival,” said Michael Dax, western program director for Wildlands Network. “Across the west, wildlife managers are promoting connectivity and protecting corridors with the Mexican gray wolf seemingly the only exception.”

“The Service is once again ignoring the science and its clear legal mandate to manage Mexican wolves in a manner that allows for the true recovery of this critically imperiled species,” said Kelly Nokes, Shared Earth wildlife attorney for the Western Environmental Law Center. “We stand ready to once again hold the agency accountable for failing to comply with the Endangered Species Act’s strict conservation commands.”

“The USFWS knows there is ample suitable habitat for Mexican wolves north of I-40 and has admitted that it is likely required for the wolves’ long-term recovery, but they continue to omit it from the recovery area despite wolves moving north on their own,” said Emily Renn, executive director of the Grand Canyon Wolf Recovery Project.  “It is unscientific to limit recovery at an arbitrary boundary for a mammal that naturally travels hundreds of miles.”

To actually recover Mexican wolves, the best available science recommends a population of at least 750 animals in the wilds of the Southwest, including subpopulations in the Southern Rockies and in the Grand Canyon Ecoregion. USFWS should measure genetic diversity using real genetic data. USFWS must also eliminate arbitrary geographic boundaries that prevent Mexican gray wolves from repopulating suitable habitat, where they belong.