Whiskey’s for Drinkin’ and Water’s for Fightin’

The committee hired a consultant to work with local communities on population growth estimates through 2050, then plug those estimates into various parts of the Verde Basin, well by well.

Several times including last November, the water committee unanimously agreed to pay the USGS to run the scenarios that the consultant finished in March 2008. Committee members include Yavapai County and all of its municipalities.

The USGS finished the computer model in April and was preparing to run the scenarios.

“That’s what the model is for,” said Clarkdale Mayor Doug Von Gausig, a Water Committee co-chair.

But Prescott and Prescott Valley officials have expressed concerns about the accuracy of the computer model, as well as the current validity of the scenarios. They want more time to analyze the model’s accuracy.

The Water Committee is likely to talk about those concerns and potential delays on the scenario runs during its monthly meeting Wednesday. It starts at 2 p.m. in Cottonwood, with a video link at the county government offices at 1015 Fair St. in Prescott.

The committee also is scheduled to talk about whether it wants a second presentation from the USGS about what the model says and how to use it.

The Prescott-area concerns center on the Big Chino Sub-basin north of Prescott, where the two communities plan to get groundwater via a pipeline. They have a right to pump about 8,000 acre-feet of the groundwater under state law, and they are worried that the scenario runs could negatively impact that right.

Previous USGS studies have concluded that the Big Chino aquifer supplies 80 to 86 percent of the baseflow for the Upper Verde River.

Prescott and PV currently are conducting secret negotiations with Phoenix-area water provider Salt River Project about how to mitigate the pipeline’s impacts on the flow of the river, where SRP owns major water rights. They have not offered any public timeline for completion of the negotiations.

It might work to drop the Big Chino pipeline water use off the scenario runs, since Prescott and PV have committed to zero net impacts on the river, PV Water Resources Manager John Munderloh said. The communities have not stated how they will eliminate impacts; the model could test future mitigation plans for effectiveness.

The population growth estimates for the Big Chino Valley are outdated, Munderloh added. Some of the scenarios assume two huge ranches will turn into subdivisions with 65,000 residents, but those plans might not be current anymore.

The Water Committee’s technical advisory group is asking the committee to let the technical advisers talk to the USGS about the model on Aug. 22 before running the scenarios. 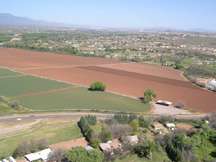 There is no hurry to run the scenarios, Munderloh said, citing the current national housing slump and pointing out that the Big Chino pipeline is not in Prescott’s five-year plan.

Von Gausig said he’s personally willing to give Prescott-area communities some time to get comfortable with the model and scenarios.

After looking at the model in detail, PV officials might conclude it would be better to spend the $40,000 on gathering additional scientific data to improve the model, rather than spending it on scenarios at this time, Munderloh said.

Von Gausig said all the Water Committee members would have to agree to that change, since it operates by consensus.