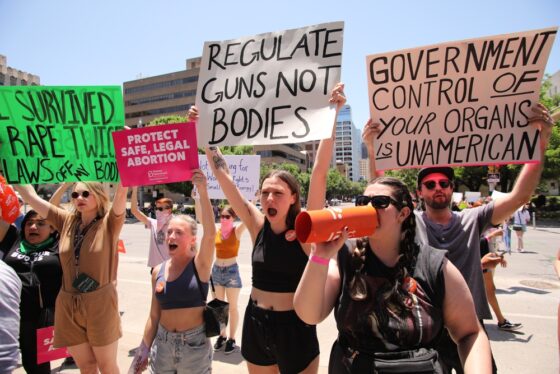 In 2009, when the Affordable Care Act was still being written, Sarah Palin coined the

US Sen. Chuck Grassley told a crowd back home in Iowa, “We should not have a government program that determines you’re gonna pull the plug on Grandma.”

Of course, the so-called “death panels” were not real, but we agree with Grassley’s sentiment: government programs or institutional ‘experts’ should not oversee life-or-death decisions. Those decisions rest with patients, their families, and their doctors.

Of course, medical institutions may have ethics panels, but this is a whole new level of intrusion.

We are sickened by news reports of doctors, in states with abortion laws like Arizona’s 1864 abortion ban, having to decide how close to death a woman must be before an abortion may be performed.

Professionals discussing how long they must let the pregnant person deteriorate (read: suffer) before acting — committees of people determining, essentially, whether and how pregnant people will die. Sounds like death panels to us. Astonishing!

In the wake of the Dobbs decision striking down Roe v Wade, and our state’s subsequent legal embrace of an abortion law from practically two centuries ago, are we really going to convene panels of “experts” to deliberate whether a particular pregnant patient is close enough to death to intervene? Apparently, health care providers in some states with strict abortion bans already have.

Why are doctors and hospitals circling the wagons? They’re scared! we would be, too.  Make no mistake, In Arizona, our 1864 abortion ban criminalizes physicians or anyone who provides abortions, with no exceptions “unless it is necessary to save her life

Folks who get it wrong pay a steep price: prosecution, humiliation, likely sacrifice of medical license, and prison for 2-5 years

Think for a minute: In 1864 women did not have the vote, could not get credit in their own name, sign a contract, buy property, or sue anyone. Her wages and property passed to her husband upon marriage and in the event of a divorce, he got custody of their kids.]

But society evolves. We are so far away from that. Is this how we want to treat women and pregnant people in 2022? It was never ok, but at least we know better now. Or so we thought.

We want to make life neat, orderly, and predictable.  We like black and white, not grey. Yet any person who has gone through pregnancy and childbirth, or the illness and death of a loved one can tell you these are foolish notions.

A hundred things can go wrong, and doctors say it is impossible to know exactly when an individual is at risk of dying.  More importantly, medical ethics require physicians to provide treatment to PREVENT patients from reaching that point.

Laws are blunt instruments, which cannot address the myriad ways a pregnancy can evolve. Whether a total ban or 15 weeks. They are ill-suited to these intensely private and personal medical emergencies.

These determinations should rest not with lawmakers or politicians, police or prosecutors.  These decisions belong between a pregnant person and her doctor. Period.

For all the folks who are horrified by the court’s decision restoring our 1864 abortion ban, know that there is absolutely something you can do: Elect public officials who will not waste taxpayer money going after pregnant people, their health care providers, family, or friends.

Elect lawmakers who will sponsor legislation to restore our right to be in control of our medical decisions in January. And for permanent protection, elect policymakers who vow to pass a bill referring an abortion rights amendment to the Arizona Constitution for a public vote and elect a governor who will champion it.

Editor’s Note: Ellen Ferreira is a retired Federal Food Stamp program executive and a Sedona community activist. Jodi Liggett is the founder of the Arizona Center for Women’s Advancement (ACWA).