Cornville AZ (April 12, 2018) – Ranch hands from the Apache Maid Ranch, based in Cornville, Arizona, ran cattle during the day of April 7 from the west side of Cornville Road to the east side of Cornville Road for grazing purposes. Because not all cows were transferred over to east side of the road during the day, there was distress among the herd causing the mother cows to knock down or jump portions of the fence in an attempt to get back to their calves on the other side of the road.

The initial call came into YCSO on April 7, 2018, around 8:30 pm, regarding black cows in and along Cornville Road between mile marker 8-11. No cows where located after searching for 20-30 minutes.

At 9:45 PM, deputies were dispatched to the same area regarding 3-4 black cows roaming in the roadway. While deputies were attempting to move them off the roadway, a passing motorist informed them of a collision between a van and a cow near mile marker 9. Deputies contacted the driver and saw the front end of her van had been smashed and the windshield shattered. The cow was dead. The driver was not injured.

While deputies conducted traffic control due to a lane closure pending arrival of ranch hands and a tow truck, another collision occurred involving a cow and vehicle nearby on Cornville Road. This was a minor collision with little damage to the vehicle and non-life threating injuries to the cow who ran off.

At 1:45 AM on April 8, 2018, a third cow vs. vehicle collision occurred around mile 9 on Cornville Road. This collision involved a small truck headed towards Cornville and one black cow. There were three male occupants inside of the truck during the time of the collision. After the cow was struck, another passing vehicle struck the cow again. The cow was pronounced dead at the scene. The second vehicle involved was not damaged. Fire personnel arrived on scene to check on the occupants involved in the incident. All were treated and released. Apache Maid Ranch personnel were contacted again regarding the latest collision. 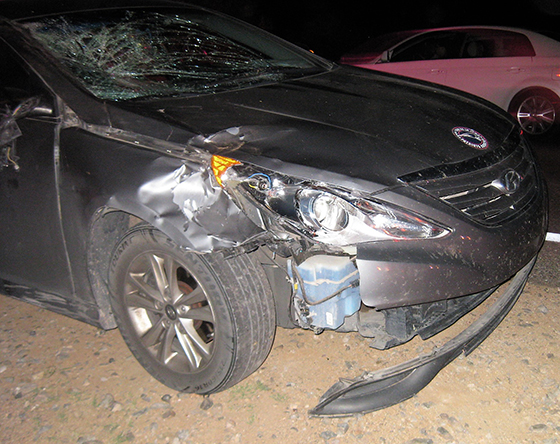 A fourth and final collision involving another cow and vehicle took place a short time later. This vehicle was heavily damaged on the passenger side quarter panel. The woman driving worked for a local newspaper delivery service. Fortunately, she did not sustain any injury, but was just shaken up. She told deputies that while driving on Cornville Road, she noticed the emergency lights and then suddenly realized a black cow was in the roadway and collided. The cow ran off and she thought it best to continue towards the emergency lights and contact deputies to report the incident.

Fortunately, none of the drivers and passengers involved required hospitalization.

If a residential property owner does not live in such a district, the property owner is required to fence out livestock on their land using a ‘lawful fence’ – see below for details.

This question is frequently asked by motorists involved in automobile accidents with livestock on a roadway, or by owners of private land in rural subdivisions whose ornamental plants are eaten by livestock from adjoining State Trust grazing land.

The landowner who is concerned with livestock damaging plants and other private property, has an obligation to fence his/her private land with a lawful fence to keep animals out. Having a lawful fence is necessary in any action to recover damages due to trespassing animals. (ARS 3-1427).

YCSO staff is working with Apache Maid ranch staff to mitigate the issues which includes secure fencing and signage along roadways in these grazing areas.