Traffic fatalities in Arizona reached a 3-year low in 2019

Total traffic crash fatalities was one of several key measurements that decreased in 2019 from 2018. The 2019 report also tallied fewer pedestrian fatalities, alcohol-related fatalities, fatalities of those not wearing seat belts and distracted drivers involved in crashes compared to the previous year.

The Arizona Department of Transportation produces the annual Motor Vehicle Crash Facts Report, which is a compilation of traffic crash reports provided by law enforcement agencies around the state. The report reflects crash data for all Arizona roadways, including city streets, county roads, reservation roads and state highways.

Reducing crashes, fatalities and injuries can’t be solved by state agencies alone because 68% of crashes occur on roads other than state highways. In fact, real change must begin in the driver’s seat because driver behavior is a factor in more than 90% of collisions. Some of those behaviors saw better results in 2019 than recent years, but there are still too many preventable crashes, fatalities and injuries occurring on Arizona’s roads. 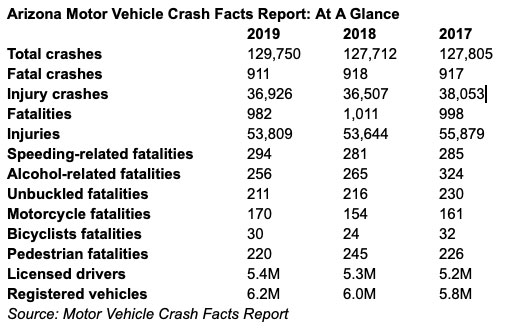 The report shows that at least 10,491 drivers involved in collisions during 2019 engaged in “distracted driving behavior.” This is an 11.8% decrease from 2018, when the figure was 11,898. In April 2019, when Governor Doug Ducey signed HB 2318, it became illegal for drivers to talk or text on a cellphone while driving unless the device is in a hands-free mode.

Arizona continues to see fewer deaths related to drinking and driving and not wearing seat belts. Alcohol-related fatalities decreased for the third straight year, falling 21% since 2017, and the 256 fatalities in 2019 is the lowest total since 2010. The number of people killed not wearing seat belts fell for the fifth year in a row – from 258 in 2015 to 211 in 2019 – but unbuckled occupants still account for about a fifth of all traffic fatalities.