I took these photos this morning in yet another failed attempt to get shots of fall color at the peaks as there is so much smoke in the air everywhere that the haze of particulate material in the air creates a white haze that can not be removed in photoshop.

These photos are as shot with no manipulation or filters … as shot and cropped!

The first shot taken at 9:03 AM was captured on takeoff from Sedona airport this morning and I was probably a couple of hundred feet in the air. The shot is looking to the ESE. Lee Mountain is on the far left, Courthouse just right of middle, then Bell Rock and part of Castle Rock on the far right. 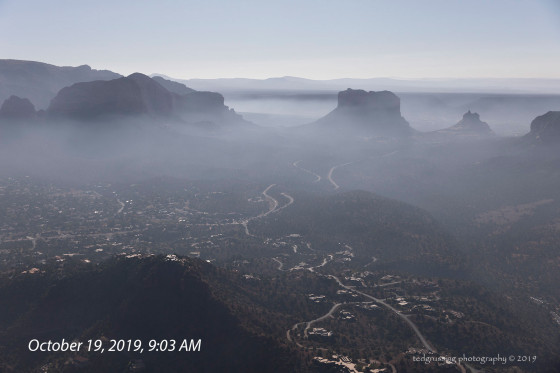 The second shot taken at 9:37 AM was shot from NW of Pulliam airport in Flagstaff and looking roughly to the SE and shot from about 11,000’. Pulliam airport occupies most of the lower left quadrant of the photo, I-17 heads south from lower center going up through the photo. The intense smoke near the rim on the upper left is from a prescribed fire at Munds Park. To the right of I-17 is Wilson Mountain, Thunder Mountain and to the left of and behind them is House Mountain Sedona and the Village of Oak Creek are down in there too  and kind of poking up in the distance is Mingus Mountain … Camp Verde is simply buried in the smoke somewhere upper left. 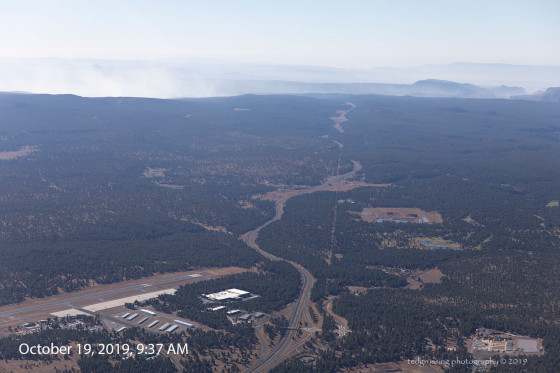 The third shot was taken at 9:45 AM on the way back to Sedona. The plateau is below me and looking forward the smoky canyon on the left is Munds Canyon carrying smoke down into Sedona and to the left of it is Oak Creek Canyon which joins Munds Canyon north of Sedona. Wilson Mountain is just above the canyon and you can see the top of Thunder mountain beyond it. left of center you can see formations coming up through the smoke (including Cathedral Rock, Courthouse Rock, Bell Rock, Castle Rock and Lees Mountain) and beyond them is the Village. House Mountain is the long low prominence near center of the image and in the distance the south end of the Verde Valley with Mingus Mountain. 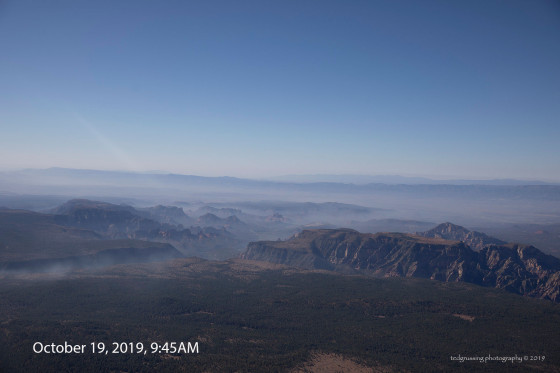 On the ground it does not look quite so bad because you are only looking through a few thousand feet if you look up or a few miles  horizontally. If you see a white haze against the rocks or forest, it is smoke and a lot of it is 2.5 micron and smaller which gets in the lungs and never gets out. There is a plethora of toxins in wood smoke none of which is good for human beings. There are small children breathing this stuff every day as well as seniors who are more at risk of respiratory illnesses plus everyone in between.

Next week the Coconino Forest has FIVE prescribed burns planned and Kaibab Forest has ONE planned. This is the time of year that we have NE winds in the evening which drains everything down here. Even if they could magically transport all of this smoke out of here, it has to end up being dumped on someone, somewhere and what kind of people just anonymously dump their sewage  on someone else?

Remember all the happy little flames in the forest which were shown to us when the Four Forest Restoration Initiative was being sold to us? This is the part they didn’t think about. Those who take it upon themselves to save others from perceived harm should probably learn how to play checkers before they engage in chess games. We still only have the one atmosphere and this is bad for all life forms and the atmosphere.

It is time to engage all the organizations that participated in this program and call them out. Human life is still more important than all other factors and none of these organizations took the health of we humans into account as they drew up and implemented their plans.

The Multiparty Monitoring Board includes the following members:

Part of the Purpose Statement is as follows:

This program establishes that multiparty monitoring will be used to determine the ecological, social, and economic effects of management actions within the project landscape. A Multiparty Monitoring Board (MPMB) of the 4FRI Stakeholder Group was established to monitor and evaluate these effects. The MPMB’s members provide support and expertise in the development and implementation of ecological and socioeconomic monitoring. This group also helps evaluate and communicate the results of monitoring activities to stakeholders and to the public.

Back with my usual photo fare Monday morning … given the ever increasing quantity and endless periods of smoke in the air this seems important. From no other vantage point can a person see or appreciate the scale of what is happening to us. The USFS is simply implementing a program enacted by well meaning persons and organizations who didn’t think it through … unintended consequences to be generous.

Though the world know me not,
May my thoughts and actions be such as shall keep me friendly with myself.
— Max Ehrmann