… one of the things I enjoy about flying during the monsoons are watching the storm cells as they roam around the plateau drenching some areas and leaving others dry.  I took this shot last August and there are several storm cells dumping rain near Flagstaff … I stayed dry … I think. On the horizon left to right (not including the one on the far left, don’t know about it) you have Sitgreaves Mountain, Kendrick Peak, the San Francisco peaks partially obscured by rain and Mt. Elden also partially obscured by rain. 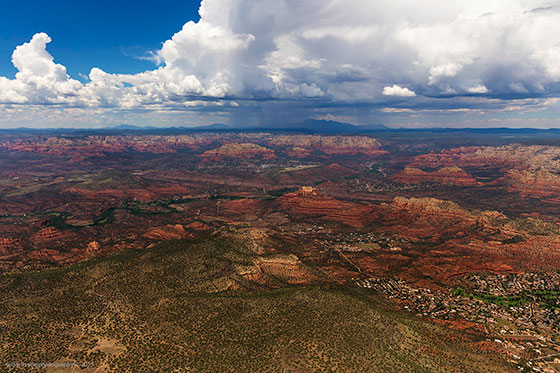 West Sedona and uptown are visible on the left and above the airport and to the right of the airport is the Chapel area. Just below the airport is Cathedral Rock. Oak Creek is in the midst of that beautiful green ribbon coming down Oak Creek Canyon and passing just to the right of the airport and continuing out the left side of the image. The golf course lower right is Oak Creek Country Club and the fingers of green are the 3rd , 4th, and 5th holes. I live off screen on the 2nd tee box just off image and my position is probably around 6500’ msl over House Mountain looking NNW. The rock formations I sent out a couple of days ago is on the upper right from the airport and are called the Nuns … thank you Rich.

A pretty neat day … working on pleadings most of the day (it has been a while), and a break at 6P for dinner at the Hilton with friends. Anthony played brilliantly and the conversation at the table was light and good.

Hard to believe, but Thursday is pretty well underway … expect to finish the drafting before noon and then some time doing fun things the exact nature of which has yet to be determined … my GoPro has arrived, battery charged and plan to mount it on the wing; downloaded the app so I can control the camera from my Galaxy S-5 phone in the cockpit, and all is about ready to go. Plan to upload the videos to the website and will let you know when that is going to happen. Think it will be kinda cool.

Time to wrap the day … enjoy life for who else can do that for you, but you.

With all its sham drudgery and broken dreams, it is still a beautiful world.
Be careful. Strive to be happy.