… one bird … Sparrow Hawk or American Kestrel … both refer to our smallest falcon in North American. We always referred to them as Sparrow Hawks when I was a kid in Minnesota, but now that I am friends with a lot of knowledgeable birders I most commonly refer to them as Kestrels. The proper name is American Kestrel and it is unrelated to the Eurasian Sparrowhawk which is an accipiter not a falcon so the term sparrow hawk is a bit misleading. They feed on mice, grasshoppers and such and are about the same size as a blue jay or dove. I think I have seen them around before, but only in flight and I thought they were doves. 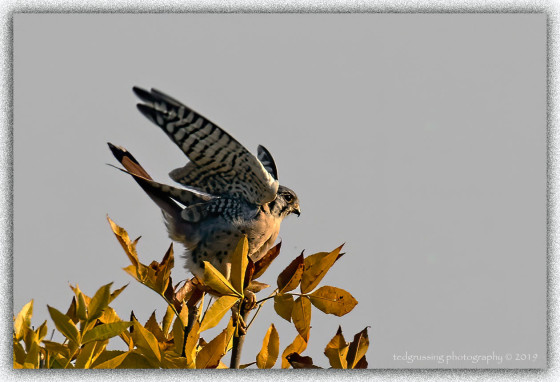 At any rate this diminutive predator was flying up from the tenth green towards our home and I did think it was a dove, but then it alighted on top of a tree about 100’ from our home I took a look at it through the lens and sure enough it was this little guy. Typically falcons have sharper downturned beaks than hawks and longer narrower wings. Anyhow, you can check them out on the Audubon website if you like: they have a more extensive writeup for sparrow hawk than Kestrel so here it is: https://www.audubon.org/birds-of-america/american-sparrow-hawk  and https://www.audubon.org/field-guide/bird/american-kestrel

A good day and expecting another one tomorrow … mask time though, as the smoke in the air is such that ash was coming down on One and me when we were out this afternoon. A friend is in for a visit from California and smoke shrouded red rocks will likely be her view all week. Bummer! The high point of the tourist season and this is how we welcome those who have spent thousands of dollars to come and visit this once beautiful area.

In the four forests comprising the 4FRI we have over 9,000,000 acres; if they did prescribed fires of a thousand acres a day, every day of the year they would still only treat 4% of the forest per year. I am told that they are currently doing prescribed burns in the areas where major fires occurred not that many years ago … what happened to allowing fire to be a natural component of the forest? Prescribed fires in areas scorched within the last decade or so? What happened to natural?

I was planning on flying this afternoon to get last light on the red rocks, but the dense smoke took care of those plans … will try again tomorrow. Lots of photo and gem work done today and that is fun.

Have a beautiful day, keep breathing but wear a mask when outside … or perhaps it is like when they execute a prisoner in the gas chamber … just take deep breaths and get it over quickly. The result of a plan not really thought through, or perhaps? Human health after all is not a factor in burn decisions … neither are economic factors such as the effect on tourism. Poor creatures in the wild have no escape from it either.