… mid-afternoon I headed down to the ponds on my way (the long way) to West Sedona to do some shopping, check on Mariah before the storm hits and visit some friends. It was overcast, low scudding clouds and very cool. No expectations of shooting a turkey, but this coot put on a good performance for me which was worthy of a turkey deciding to get out of Dodge before tomorrow. On a connoisseurs scale of one to ten, a coot probably ranks a minus 10 … only a fit meal if you have no other food, are starving and out of ammunition to shoot a more edible bird. They are a lot of fun to watch though and they are very efficient food gatherers. I watched a rather lazy Widgeon trying to take food away from this coot when he came up from a dive with an ample amount of sea weed in his beak … perhaps there are more similarities among the animal kingdom to ours than is generally thought. 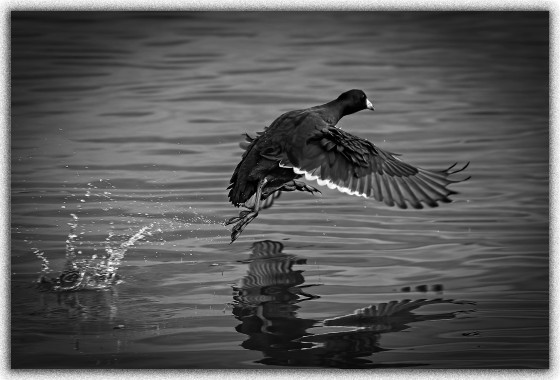 No coot for me today … a delicious feast at a friends home … have a very Happy Thanksgiving and celebrate the bounty we are able to provide ourselves and others. This is an amazingly wonderful nation and our citizens and those who aspire to citizenship are an incredible example of what is right with the human race … and unlike most nations our citizens are the ultimate power in this country.

A word on quotations found in internet searches … no matter who the quote is attributed to, check further and find the source … I am amazed at all the mis-attributions of wonderful quotes. The more famous the person, the more quotes attributed to him that in fact are properly sourced elsewhere.  QI is a tool, but doesn’t have them all by a longshot: https://quoteinvestigator.com/  I had found numerous other quotations I thought about using tonight, but it was impossible to accurately determine proper credit.

My original interest in Max Ehrmann came from Desiderata … Corky and I had it up on our home bulletin board forever it seems, but we had the version that was by Anon, found in old St. Paul’s Church, Philadelphia circa 1640 or something like that. It was not until a friend told me it was Max Ehrmann in 2009 that I got the source correct. I went on to read everything I could about him and purchased and read all of his works. Quotations are easy to attribute correctly when you lift them from a published work authored by the person, but many great quotes are from speeches and the like. In like manner, I have now purchased all the works or Plato, Xenophon and Aristotle and have begun reading them again … neat with Kindle because you can bookmark and highlight portions you want to return to. Rather re-read in the Greek again, but that will take me time if I decide to go through the requisite study to relearn the language … that may not happen.

A VERY HAPPY THANKSGIVING TO YOU AND YOURS.

Let us never forget that government is ourselves and not an alien power over us.
The ultimate rulers of our democracy are not a President and Senators and
Congressmen and Government officials but the voters of this country.