Every day I go out with One, I take a bunch of photos of her … the other day she was rolling in the crushed red rock we have for a yard, kinda raised up a bit and I took several shots. I didn’t think any more about them until I uploaded the images from the card tonight … I love cat eyes as they are so brilliant and was surprised to see her eyes like this … not sure what it is, but believe the angles were such that she picked up a reflection of the rocks in her eyes. Anyhow they are more beautiful than I could think of doing so here she is, perhaps she is a portal to other reaches of the Universe. 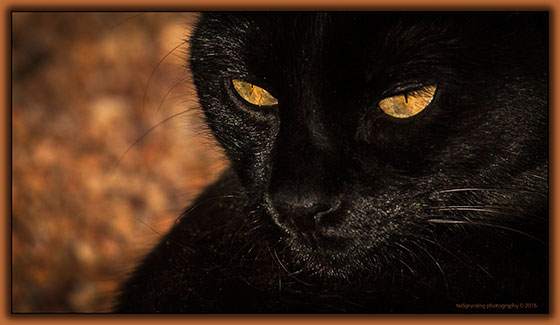 The presentation went well this morning and more than five showed up … whew! Actually there were quite a few people there and it was a fun time. Thence to the ponds, to Wildflower Bakery for a large sugar free vanilla latte and then home. A quiet rest of the day, dinner with a friend and a quiet evening. I was invited back to speak again next year and this time the subject will be wildlife photography featuring wildlife in our area … subject to One’s approval, but definitely not her prey … messy!

Tomorrow will be spent catching up on a lot of things around here including a good effort on the emails … down to 338 now.

Can’t decide whether it is January and the gloomy weather and getting over a nasty bug, or a lack of chocolate affecting my mood … the days are getting longer, as are the days since my last chocolate … seven days to be exact :+) I’ve  switched to pieces of sharp cheddar to snack on and a slice of sharp cheddar on toasted sour dough bread instead of apple fritters with my morning espresso … also cheddar with apple slices. Yum! I just lost interest in chocolate and thinking of seeing a doctor about that … I don’t think that is natural!!!

Wednesday is a wrap … keep breathing and if that doesn’t make you happy, nothing will … smile and share your joy!