I had planned on doing a composite tonight, but a couple of factors mitigated against doing that; first I watched Band of Brothers until 12:30A and second I browsed a few of my wildlife folders and came up with this shot of a Ring Neck duck making tracks as he goes airborne behind yet another one which is not in the frame. The resulting explosion of water looks like tiny stars and galaxies … wow, do you think this could be the big bang? I would kinda like a universe created by ducks taking off like this … imagine the vibes that would echo through all of time :+) Anyhow, as you can probably guess I love shooting wildlife and especially anything in the air. 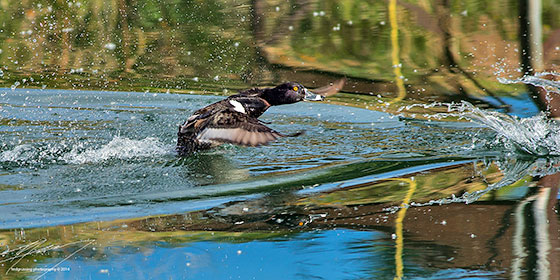 Monday is well underway and on the East Coast, good morning to Dick and Stacy, Jim, Fred and Nan, Joleen, Seal, Carrie, Wayne, Cindy, Dave, Van and everyone else. Just feeling good I guess … few things bring joy like thinking of friends … here and not.

Share your joy, a few smiles will do the trick