… for the daily food and the day that was … for the Walmart in Cottonwood where people drop food … thank you! Late afternoon I stopped by the airport and did some maintenance on the shade I keep Mariah in as repairs are nearly done and early next week I get her back. After the airport it was a Walmart run for some odds and ends I needed and as I came out of the store I first heard, then I saw some Grackles in a tree in the parking lot near my car … I put the stuff in the car, grabbed my camera and they were still there and looking good against the blue sky … and here is one of the shots I got and he appears to be expressing a reverence and appreciation for life. 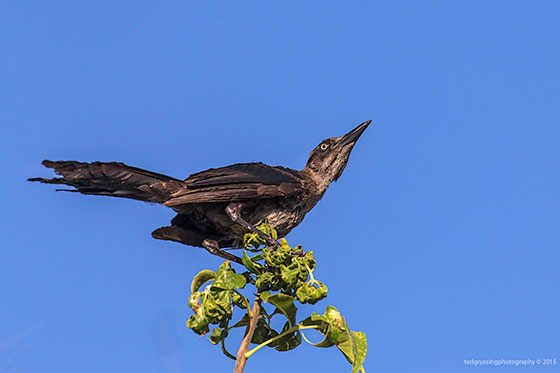 I’ve reverted to using the 1D X bodies for wildlife and it was strange to see files of 18 or so MB instead of the 50+ MB from the 5Ds R body. Repairs on Mariah are almost done and next week will be a return to the sky and beginning the reshoot of a lot of my aerial work with the 5Ds R … that is what I bought it for.

I have had a number of emails wondering who is who and what and where type stuff, so for clarification … I have two daughters; Sus, her husband Ted and daughter Annika live in HMB which is Half Moon Bay in California and Joleen aka Jogi and her daughters Caroline and Ellie live in Connecticut. “One” is my cat and she follows Nimbus and Q … likely if I got another cat it would be Two … long story.

Mariah is my Lambada motorglider which is currently being repaired after an unfortunate incident (July 1) when after landing and down to about 20 kts had her line of rollout changed from centerline of the runway into the grassy area between runway and taxiway by a dust devil … unfortunately up here dust devils do not have dust so you cannot see them and at a low speed like that in a tail dragger there is insufficient control to overcome a force like a dust devil pushing hard on the tail section which is then acting like a sail.  The airport in its infinite wisdom has about a 2’ deep ditch in the median without which I would simply have rolled up to the taxiway without incident or damage. Thanks to Geoffrey for letting me store the wings and tail feathers in his hangar and to Heath, Tami, Rob and all the great people at Performance One at Falcon Field in Mesa for the incredible swiftness in organizing and performing the repairs and also to Joe Kulbeth the dealer for all things Lambada and Sundancer for getting parts out of the Czech Republic and over here in less than three weeks.

My ground sickness ends next week when we put her back together and I go flying again.

We’re into the weekend … The acronym “Filoli” for the gardens I love to shoot was the credo of William Bowers Bourne II who owned one of the richest gold mines in California history and it stands for “Fight for a just cause; Love your fellow man; Live a good life.” What better thought to carry into the weekend and the rest of your life? You can read more about the family and the estate at: https://en.wikipedia.org/wiki/Filoli

Smile, share your joy and let love fill your being … back on Monday.